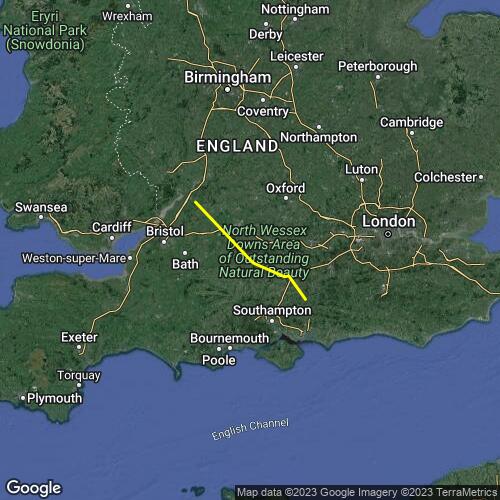 Very few pilots on Selsley given the forecast as Ali, Richard and I arrived. Clouds were popping, a gentle 4 to 6 mph breeze with cycles coming through.

By the time we were ready to launch the popping clouds were now several banks of well spread CUs, shadowing large areas. The fear of greater cloud shadow encouraged everyone off in the first cycle. However, that first cycle was short-lived forcing all to land after only 5 mins.

The next cycle saw the first gaggle away, with me near the top of a 1.2mps climb until I headed back to the hill for no fathomable reason, before turning back and joining the bottom of the gaggle. Ali and Peggy hit base whilst the rest of us clung to whatever lift we could find. It was a very slow climb out!

Shortly after climbing out, what started as the fellowship of the climb soon fell apart, and we all went off in groups of one or two. I pimped of Alex for a few climbs before he decided to bail out.

I flew on, landed, got a lift to the station and rode the train back to the car. An okay day that I feel could have been massively improved had there been company.