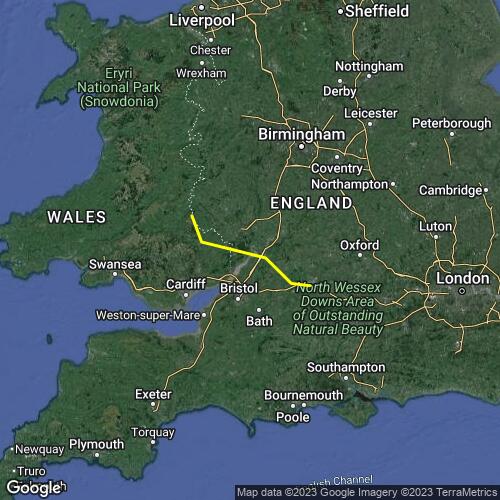 Light northerly winds were forecast Tuesday evening so the Blorenge was the favoured site. Wednesday morning and all change. Now Hay Bluff was the chosen site on telegram. I'd already arranged to meet Ali at Abergavenny train station, but messages from Peggy, Agi and Norris convinced me to amend the plan. Site guide read, parking found, pin received - We were off!

Having never been to Hay we took the direct, road closed route. Luckily for us we were able to pass where part of the road had fallen away. On arrival Hay looked magnificent. Students on training gliders in the bottom field, speed wings skimming the hillside, and several wings soaring. Everything was so exciting I almost forgot about the hard, steep carry up. Almost!

A triangle was the original plan, but a significant breeze put an end to that idea. The new plan was 3hrs airtime and to cross the river. Ooooh! Pilots wasted no time in getting away, as high cloud was creeping nearer. Peggy and Tosh were the first away with Paul J leading the second gaggle. By now you had to pick your moment to launch as the breeze was quite strong. Even with a breeze and steady 1 and 2mps climbs the going was painfully slow. The first 20 or so kilometres were all about choosing a good line.

But enough about the conditions. I crossed the river Severn! Yeah! We had plenty of height, but it was still a scary thing to do. And the views were captivating. Wow!

After that I flew a bit, went over Selsley, flew a bit more then landed at Swindon.

First flight from Hay and first crossing of the Severn, in 6 hrs - Wow! Nuff said: -)