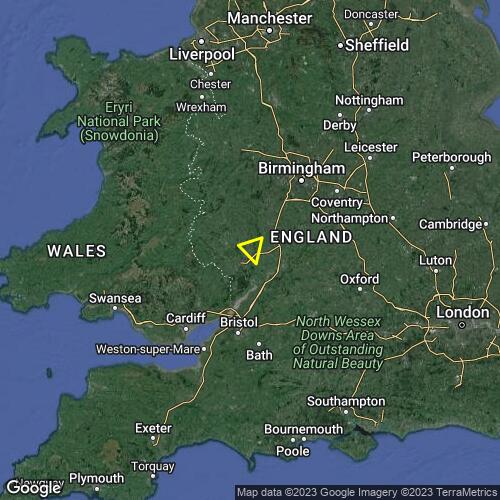 At 10:45 the Beacon started out misty, with signs of a heavy inversion. Winds were light and generally from the NE occasionally swinging round to the east. Behind the hill there were the odd cumulus, but they were way off!

Then the super heroes started arriving. First Idris, then Joe and then Alex. They set a task, maybe 45km ish, but the task increased as conditions improved. By the time we were ready to go, the task had morphed into a 70km triangle.

The gentle breeze veered from NNE to east and we were off. Alex and Joe climbed out easily, but Idris had to push out front quite low to find something. As he established himself Ben, Peggy and I Took off to join him. The three galloped off leaving Peggy and I chasing hard, but we fell too far back just before the first turn point.

Time for a change of plan. We'd lost Ben early on and Peggy had stopped short and decided to go for something different. I was now on my own but didn't have the confidence, the gumption, the 'Let's do it! ' spirit, the guts, the. You see where this is going. I chickened out of doing the declared task.

I selected a suitable turn point and went for it. Pretty much the whole flight was at a comfortable altitude so no real moments. And there I was, 3 hours later looking down at the Malvern Hills again, and joined by Alex, Joe, Idris and Peggy. All back on top!