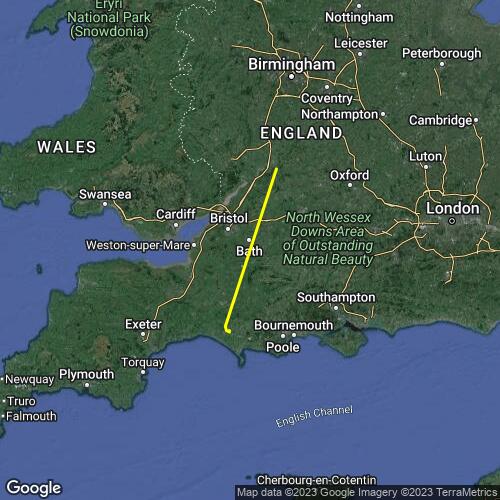 10am, light winds, no clouds, this was the scene that greeted pilots arriving early at Lecky today. But a goodly number turned out all the same. To be fair most pilots arrived after 11:00, but those of us concerned about parking, keen to catch up with gossip, or with nothing better to do arrived at dawn!

The day started late with Joe D taking off about 12:30. He skied out, but it still took 10 minutes before the crowd organised themselves and took off. I was 4th in the air and got a great 2 ms climb up to about 2 grand where it just seemed to peter out. Up until then it all looked great with 20 or so gliders spiraling below me. Then all 20 gliders were just kind of milling around at 2 grand looking for something better. As we were getting in each other's way some went back to the hill, some up, and others, well. The fellowship of the climb was already broken.

It was here I wasted lots of height and time being indecisive, flitting this way that. I eventually found another climb and decided I'd be more decisive! I pimped off Ben F, Tim C and Benjamin D until I got to base then set off after Joe and Charles. I eventually caught up with them just before we passed Westbury, only for us all to scrabble around in zeros and half ups. The struggle became desperate as we passed Bruton where Joe got away from us, and a few Ks later Charles just missed the climb that kept me above 2 grand.

Things looked bleak. I was just managing to maintain. Then, shazam! Graham S arrived. Grey soon found a weak climb and the adventure was on again. We flew for another 30k before he took a sharp left and flew straight to the deck. I'd said wherever he landed I'd land with him. Well, he's got a dodgy arm and we'd been flying for 5 hrs. Apparently he'd been on the phone arranging a retrieve! And taking pictures! Some people.

His friend did indeed pick us up, but couldn't take us all the way back to Cheltenham. We had beers to celebrate, and a bit of pain relief, taxi back to take off and a quick chat with Charles who arrived in the car park at the same time. A fun day. Long. But fun!