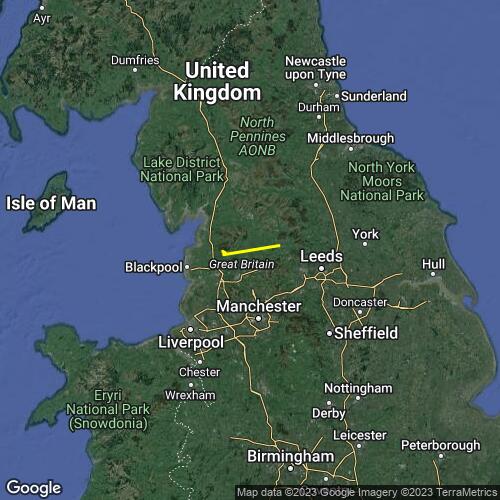 Yet another unexpected flight. Most forecasts said 'blown out' but I found one I liked better, and went with that. The presence of Chris F on the hill was encouraging - maybe I'd got it right after all. First hour was spent bimbling around the west bowl in snotty unpleasant air, and gradually the others went down, clearly not having much fun. I stuck around, and prompted by the offer of a retrieve and finding a strong organised climb from the SW spur, went on a downwind dash to Dunsop Bridge, the Parlick milk run.

Chris also found a climb and headed over the high ground while I opted for the valley as base was barely 3000'. Past the Inn at Whitewell, landing gear down, thoughts of an early pint at the pub, I squeaked over a little pimple that ticked all the textbook thermal trigger boxes. It was rough at first but soon organised into a decent climb up to a great-looking cloud street. Once there, the lift was consistent and easy to follow. Only trouble was it was pointing straight towards Skipton and Leeds Bradford airspace. I made a couple of attempts to track north, but there was nothing but blue. 60 min after leaving Parlick, I was 40km downwind at Skipton - a bigger distance was on but there's not much room to sneak under the airspace over the high ground beyond the town. Oh well, a nice day out, super big paying field to land in (vertically! ), a cold beer and a bus pass ride back to Clitheroe where JohnO picked me up.