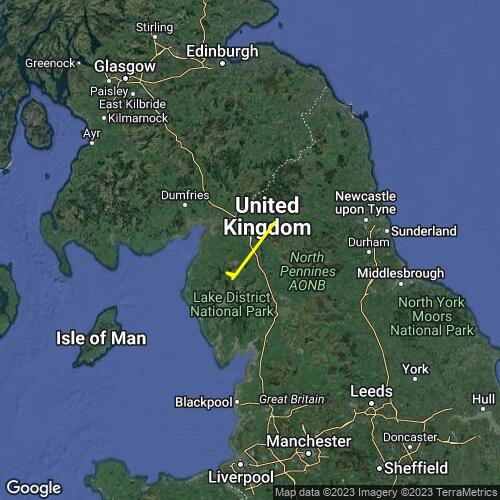 LCC weekend, but not as a competitor. Piles of pilots on Blease and a zig-zag task before foal at Southwaite services. Took off without a plan, which is never a good idea, so we wandered about with vague notions of flying back to Grasmere (never going to happen in that wind) or joining the dash over the back. After 2 and a half hours of exploring Blencathra and Skiddaw I'd almost decided my boots were full, I could land near the cars and offer to retrieve Jim as payback for all the rescues he's done for me. Note to self: improve slope landing skills. Like a dole-ite looking for work, I was seeking lift and desperately hoping not to find any so instead of landing I found myself getting beaten up in the converging thermals coming up Blencathra's gullies, until I got a proper climb up to base.

Decision time: All that height and a cloud street to Carlisle, not a hard choice. Passed Carrock, with Richard B's warnings about not landing in bandit country around Souther ringing in my ears, but at 5000' that wasn't an issue. Sea breeze from Solway Firth was an obvious problem, so I had to make a few dog-legs inland to avoid it. But each cloud was working, and base just got higher peaking just shy of 6000'. Past Carlisle, I turned a bit more crosswind to follow the A69, and thought Haltwistle would be a good target.

Then all hell broke loose and I got a wild ride in horrible broken turbulent thermals. No consistent lift and I clearly wasn't going to make Haltwistle and didn't fancy my chances hitching along that fast road, so turned back to Low Row, thinking that I might have a chance of thumbing from there. Jim had phoned me in the air, told me he was on the A66 and I thought as he'd just landed he'd be ages getting his car so I was on my own.

I discovered the reason for the turbulence as I circled over a nice big field: down here the wind was straight East, and strong! So the upper and lower winds were nearly 180 degrees opposed. Good job I made a formal landing approach and checked the drift: most of my approach was vertical.

And Jim was there before I'd finished packing! He'd landed earlier and was following me on LiveTrack, courtesy of my AirWhere app. Another cracking day out, and well done CSC for such a great weekend.