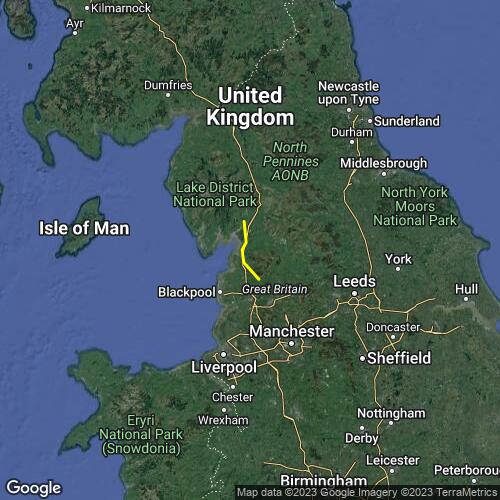 An unexpected bonus today. RASP only indicated a narrow 2-star finger extending from Parlick towards Morecambe Bay starting around 1:30, and I didn't have time to make the journey to the better conditions in the Dales. OK, Lancaster would be a good short target and I loaded up with Bus Pass and timetables. A bit of a frustrating morning, with rough spring-like thermals and massive sink in between; a couple of false starts had me back on the ground for lunch and a re-group. Spot on cue a seagull started circling at 1:30 so I joined it for a wild 6 m/s average climb, which apparently looked pretty dynamic from the ground.

Not a cloud in the sky and no more birds, I dithered over the west bowl but continued climbing well beyond the predicted thermal height of just over 3000'. OK, might as well go with it, and I drifted in zeroes over what used to be 007, and is now just 7. This kept me consistently high all the way across the moors to the M6, where the drift turned more northerly, so I reckoned I might just scrape in to Lancaster, as surely the sea air would kill any thermals.

Not a bit of it, towns and villages were all pumping out decent lift as I skirted the coast, passing over Lancaster, Carnforth and Warton. I began to entertain thoughts of getting to Kendal as I passed Farleton Knott and Junction 36 on the M6.

Alas it wasn't to be and I was soon down just beyond Milnthorp. The A6 was full of drivers in a hurry to get home, and it wasn't looking good, but a couple of lifts got me to Carnforth where I bought a train ticket only to find there was a huge delay and I had no chance of making the connection to Preston in time. But this is what mates are for - Jim A, Phil W and Murph all rang me to offer lifts, and Murph it was who drove out to pick me up. I gave my train ticket to a lady arriving at the station, so spread a bit of karma around.