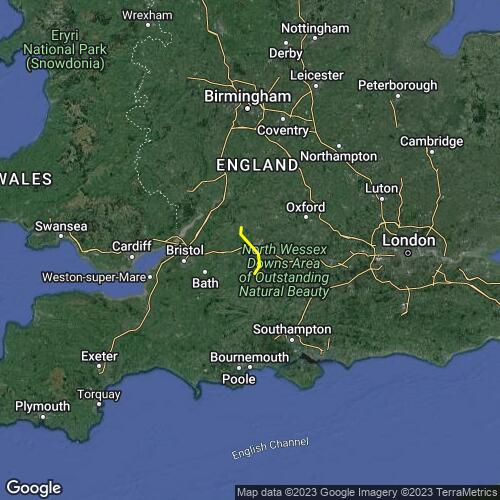 I hadn't flown a decent UK XC for some years, and was particularly rusty, having had little opportunity to fly for the last couple of months. So I was a bit dubious about going to Golden Ball, where I knew that I would have to fly like a proper pilot. I was also dubious whether it would be worth a 2 hour plus journey just to find the car park full. However, I managed to get a parking space, and was the sixth person on the hill, and the fifth in the air, so first requirements met. It was more windy on take-off than I expected, and I realised that I would have to get in the air quickly in case it became too strong, although it was too early for an XC. After about 50 minutes boating around, one thermal rose above the previous ceiling. I was shortly joined by Andrew Craig, and a couple of others less closely. I found it a little unnerving thermalling with someone else, as I had not really done so for quite a while, but Andrew flew very considerately, so no problem.

Once I had set off on glide, I found the drift taking me toward Marlborough, but I had set a modest goal to the North, so decided to set off toward it. I soon found myself approaching the ground, and thought the flight was about to come to an early end, but fortunately got a low save (is 150m low? (It seemed less than that)), and was able to continue. It was quite exciting to cross the M4 for the first time, and then the Cotswold Water Park. I discovered that XCTrack gives a nice message saying GOAL! But I flew on for another 10k before descending to a nice big, flat, grassy field.

Thanks to Andrew Craig for organising retrieve.