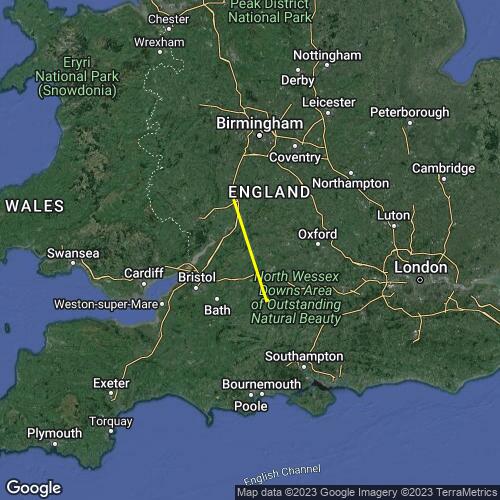 Sunday 10th looked the less good day of the weekend but I opted to lift share with Ben Friedland and try Milk Hill. After a conflab in the car park we opted for Golden Ball as the wind was light and we had the ridge much to ourselves. It was an early start and patience was then needed to work a streaky blue sky until the little Cu's upwind reached us.

I took a tempting climb over the back and worked the clouds and various towns, quarries and solar farms all the way to the Cotswold escarpment- thinking several times 'if I bomb here it's a good 50k and there's a lovely cafe I know… '. Base was just shy of 5000' and there were plenty of little clouds to work, although with light winds the pace seemed sluggish and patience was needed.

I opted to head South of Cheltenham and got drilled in the sinking air behind the Cotswold Edge. Passing over Cheltenham at 1000' a spiky thermal got me back up to over four grand and on to Tewkesbury where the sky was very milked-out and hazy. A climb off the town itself finally got me just short of Upton and safely landed in a huge field.

Hellos go to Ben, Ollie Clothier and his gaggle who I left behind over Leckhampton. Peggy, who followed it on Livetrack, phoned in a 'well done' and suggested I phone Howard, Howard Woodward who got me to my car to pick up the others and finally Alex Hickey who I retrieved from Swindon and was stoked with his first 100+km flight to Droitwich.