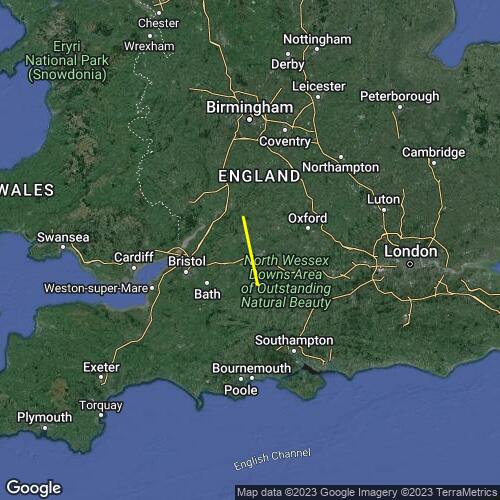 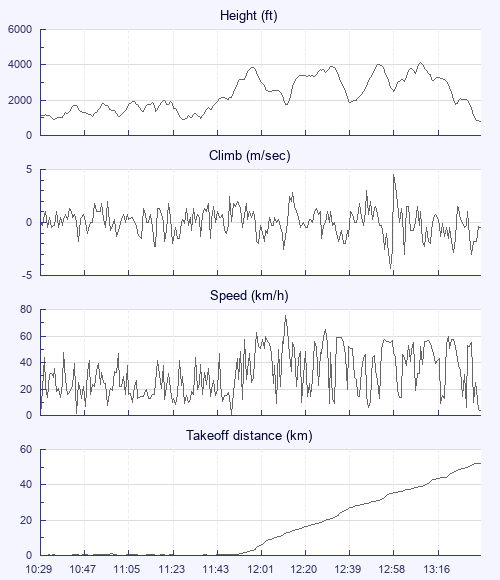 I rode my scooter up to the Golden Ball car park, knowing it would be rammed with both pilots and walkers, and was pleasantly surprised to find that I was one of only five at launch getting our kit ready. I was second into the air, with a soarable breeze, and spent well over an hour getting climbs up to about 2,000 feet.

As we played for over an hour, some nice-looking cumulus clouds approached from the south, and, sure enough, once they'd arrived it started working properly. I climbed out in a gaggle including Steve Newcombe, David Williams and Ben Friedland, as well as an orange Phi that might have been Gerry McNicol.

I had foolishly taken off without any heat packs in my gloves, and after a little while at over 3,000 feet my thumbs got very cold, especially as there was a lot of circling in very light lift. A couple of times I set off on glide simply to give me a chance to tuck my hands under my arms! But it seemed to work out well: when I was down to 1800 feet a pair of buzzards put me back i the game, with the gaggle reforming around me.

Past the M4 we lost Steve, but met up with some pilots who'd been ahead and further west - I think Dave Warren was one. The sky was getting milky now, though still buoyant. But my freezing hands sent me off on another glide and this one took me too low - big power lines ahead of me put me off trying to work some broken lift for a low save.

Ashley Barnes, Jim Mallinson and Peter "Springy" Beleznay had landed quite nearby, so we agreed to gather at the excellent Colesbourne Inn. I was walking there, but got a lift from the only car to come along, having already arranged a seven-seater taxi from Colesbourne. After a quick pint, we set off to pick up David Williams and Steve Newcombe on our way back. David looked as if he'd given someone an overenthusiastic Glasgow kiss, but he assured us he'd just had a brush with a hawthorn hedge on the way out of his landing field.