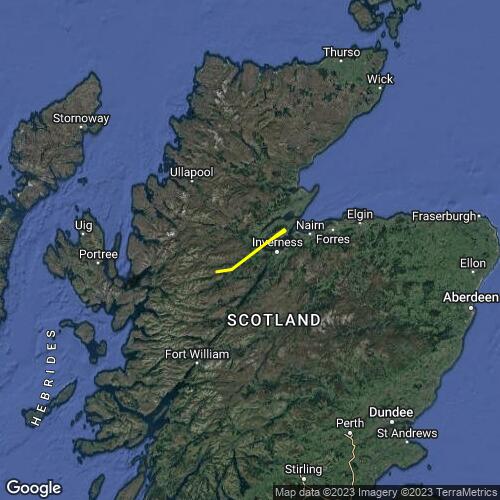 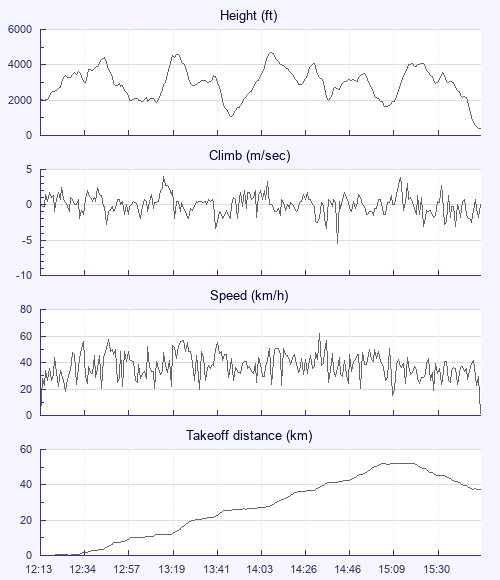 Walked up An Soutar with Kev & Paul and regarded the universal high cloud with some dismay. However, before long there were lines of cu setting up above the terrain and prolonged thermic gusts pulling up over launch. It was bitter on launch and so I decided to get going as before I froze solid.

Took a climb straight off launch. It was weak and broken but got me halfway to base, and high enough to venture on. I was actually glad for the high cloud as I had a feeling that it would have been a very full on spring day without it. In mitts and three jackets I didn't fancy doing battle. A mellow day suited me fine! Looking back I saw that Paul & Kev has climbed off launch too.

I still didn't expect much from the day and pushed on low, expecting to land in Cannich. However, weak climbs kept me venturing on and finally I caught a ripper over the south facing wall of Strathglass. This got me high enough to set Beauly in my sites. And this was the nature of the day. I would climb and extend my target accordingly. I had in the back of my mind to try to connect with the convergence line that often seems to set up along the spine of the Black Isle. And I think that is what happened. Once I was over the Black Isle it was very easy to boat along, taking the occasional climb off ploughed fields, often marked by gulls.

As I got to Rosemarkie I saw the distinct line of the sea breeze advancing across the sea towards me, with an obvious convergence cloud above it. I took a rough and strong climb in that convergence before turning westward again. Ahead of me now the ground was completely shaded and the clouds had no form - I figured I was not long for the ground. I managed to get to within about 3kms of where Becky and the kids were at an easter party, Kev Will - the legend - had followed me and so appeared in my landing field within moments of touch down. He took to join the party for tea and chocolate biscuits.

They say the unexpected days are the most rewarding and this was a good example. I really hadn't expected much more than a top to bottom but managed a shade under 70kms in the end.