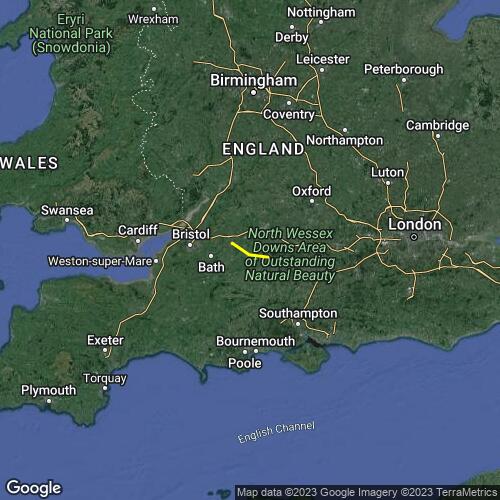 In contrast to Friday, when there were plenty of playful kites to mark the climbs, we had very little help from birds at the hill today. Chris Williams climbed out on his own, and Jim and I thought we were on our way, but we lost the climb. Finally a crow marked the one that took Jim, Craig and me away.

When Jim (on his Alpina) set off in pursuit of Craig on his two-liner, I considered chasing them, but I was still going up, so decided to stay in what I had and take it all the way up, which turned out to be 4850 feet - the highest I've ever been over my local hills, as usually I'm quite a few km downwind of Milk or Golden Ball before I get that high.

And it was probably the flight on which I've had the least worry about going down - I see from the statistics that my "lowest save" was 2800! On last week's XCs, that was about as high as I got. From time to time I saw Craig and Jim ahead (they made it over the Severn), but with gulls helping me, I made my own slow way past Calne to Chippenham. Aha, I thought - a station. So after a circuit of the big playing fields north of the town to get my flight up to 30k, I landed.

Chris, after making his 55k goal, was on his way to Swindon, where Ella had offered him a lift; I invited myself to join them, and was back at the hill nice and early. Seeing how the Malverns mob had spread themselves all over Mid-Wales, I was very pleased to have stayed local!