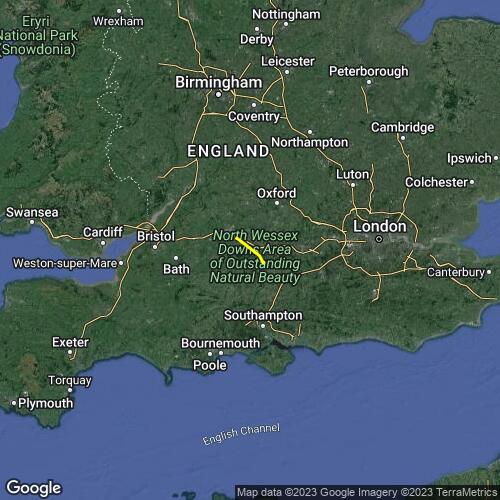 I was surprised to find myself all alone when I arrived at Liddington, but after an hour or so, two chaps arrived together. Their attempts to fly resulted only in short beats of the hill. Conditions were obviously not good. After a while, I decided it was looking a little better and worth getting the wing out. My first flight was a similar short, uncomfortable ride. The next attempt was initially equally uncomfortable soaring on the ridge, but it then gave me more height, and I decided to venture over the back while I was in rising air. I was really expecting a short flop, but I managed to stay with lift quite a while and the flight gradually developed into a decent and pleasant XC. The landing presented a return to the unpleasantness. But I got safely down in East Woodhay Cricket Club. A nice lady gave me a lift to Hungerford, where I booked into a hotel and waited for the bus back to Liddington 2 hours later.