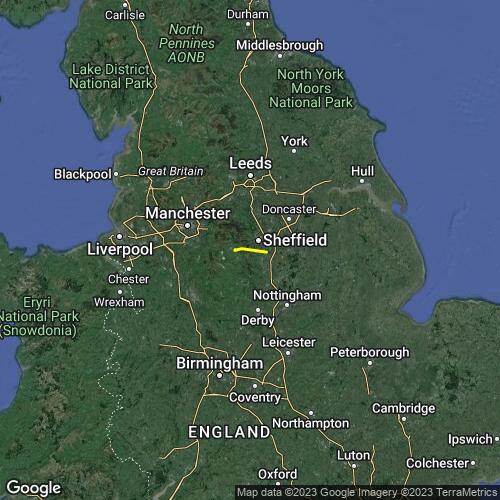 Decisions, decisions. 4 different triangles thought about, then the wind is howling when we get there, so a downwind goal. Then there's no wind. And it's hot. There's nothing more bizarre than seeing a hillside covered in polar exploration-equipped people sweating their bits off in the heat. 15 minutes prepped and clipped in was all I could manage before unclipping and stripping off again.

Eventually the thermals started to look promising. Missed the first cycle, but got off quickly with Simon, and we wrestled (appropriate word after the earlier events on takeoff) with a rough one to the left of take off. Somwthing was wrong - I couldn't turn left without a struggle and the glider was constantly trying to go right slightly. I couldn't see anything wrong so persevered with it as everything seemed fairly stable and safe.

Chasing after the first gaggle who didn't seem to have gone far I skimmed low over the moors at the back before finding a climb to take me towards the edges. There's Jacob! An ideal target so we shared a short climb together before gliding off eastwards towards goal. I know he's a better pilot than me, but my glide was awful. Then I had another good look and saw the problem - two knots in the brake lines towards the right wing tip. I later found that several people had been calling on the radio to warn me, and shouting in the air but it just wasn't obvious from the harness. Should have landed immediately back at the hill, but my radio had turned itself down, which explains why i heard nothing all day on it, despite a radio check on launch.

So with a compromised glider I became less willing to fight into the snotty thermals, unable to turn left consistently and the wing diving into right turns I settled for a nice grassy field just past Dronfield. When I checked the wing, the knots just loosened themselves as usual with the tension off. I gave myself a good talking to about pre-flight checks. Thanks to John for coming to pick me up.