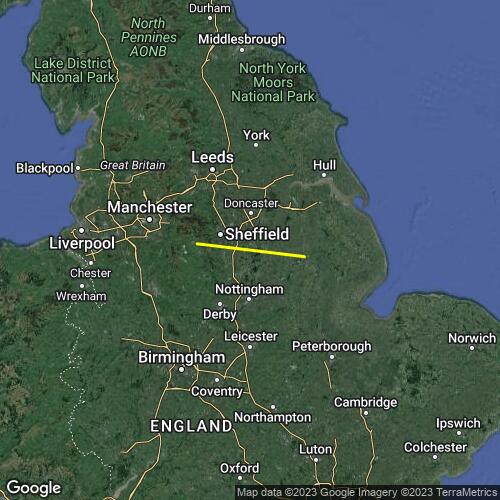 This was a challenging forecast. Mixed reports of winds, some saying none and others saying a potent Westerly. Blue skies throughout, but some nice stars! I had planned a triangle, but got to launch and the breeze was significant. Therefore I set a goal of Lincoln, as there was a very strong sea breeze reaching nearly all the way to Lincoln which I expected to cull any chance of getting to Skegness. We had a good group of Pennine pilots with Simon B, Brian and John O joining me.

Set up and ready to go, and the wind died off completely. Bugger! The Butterworths demonstrated their class by climbing out together, whilst I left it too late and ended up in the bottom landing. Last year this would have got to me, and put me in the wrong mindset. This time I remained calm, it's not a long walk up and it was still early on a day forecast to get better in the early afternoon.

I packed up and walked up as quickly as I could in the severe heat. Helen managed to climb out, but otherwise I hadn't missed much, and it wasn't too long before a group of us got up and away.

It was tricky to know where to go next with no clouds. After mincing around for a while most of the gaggle went left towards Stanage, and I didn't really like the look of that with the altitude we had. I went over the train station, as I've often been fruitful there and it worked once again.

Over the moors and between Sheffield and Chesterfield. Brian had joined me but had a knot in his wing, meaning he glided like a rock determined to reconvene with terra firma. He landed safely, doing well to get so far with a compromised glider.

Simon B caught up to me after getting much higher than I did, and then we both broke through the inversion. Conditions were really good now.

We started getting low in a tricky area with solar panels and trees narrowing landing options. I went over the panels with sufficient altitude, and rocketed up. Simon unfortunately landed, meaning I was alone.

From this point it was quite straightforward. Big altitude, loads of climbs over the endlessly dry fields and several sailplanes marking them and coming to say hello. I really enjoyed this. One slight scare with a long glide before Lincoln, but I got another one and was rewarded with a beautiful descent into Lincoln with the cathedral looking splendid in the sun.

Chatted to some people, packed up then realised I would need to run to get the train. Sweaty day! Trains to Sheffield and then the very generous Helen and Matt took me back to the hill, thank you. Can't beat the paragliding community!

This flight was a good reminder for me that cross country flying is not just about the massive PB breaking flights, all cross country flights can offer truly magical and memorable experiences, and it really is a pleasure to be able to do it.