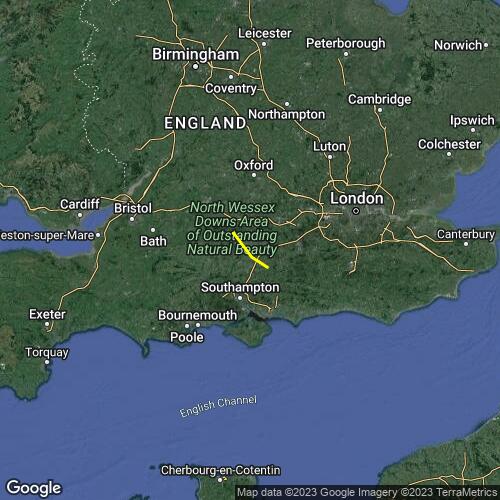 Very different from Tuesday - blue and fierce! I was glad to get a climb almost straight away under Mike Long and a couple of others. But at the top no one came with me downwind.

I occasionally saw a couple of wings north-east of me, probably better placed - I had to make sure I was heading east enough to miss the corner of Southampton airspace. Once I'd done that, it should have been easy, but I got low and a couple of red kites didn't quite manage to get me into a proper climb.

Then a helicopter flew over my head, and I thought I'd better get down fast in case there was any downwash (there wasn't - or it didn't reach me)

Having got a lift from Jim, I was unencumbered by any need to get back to Combe Gibbet, so the retrieve should have been easy. But I'd landed far from anywhere with a station or bus stop. A long walk to the road ended at a lonely junction. The first traffic was a young lady on a horse; she was leading a second one, but laughed at my suggestion that I should get a ride on it.

Eventually two lads in a van said they'd come back and get me in ten minutes if their wives didn't need them for anything; but before they returned, a builder stopped. He'd been picking up his work van after repairs at a nearby garage. He offered me a lift to Petersfield - in the wrong direction, but equipped with a busy station. Nevertheless, after narrowly missing several connections, I was home quite late.