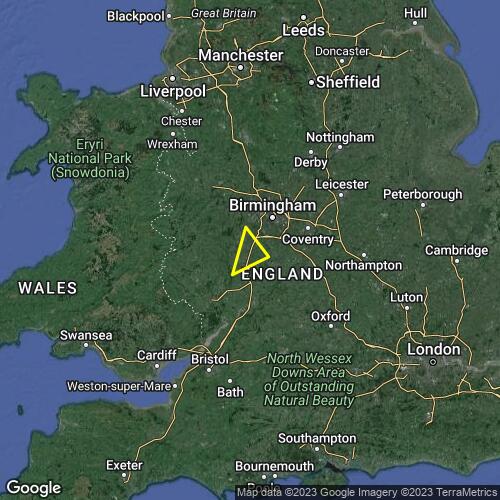 Oh it is a waiting game.

Well we had decided on the Beacon and the consisted of Myself, Kirsty, Tom and Laurence. RASP had been saying 5 star conditions all day and working from 12, but with zero wind, so we of course had set a triangle. After negotiation I set a Triangle at around 95km as it seemed big enough for a decent score but also doable in the forecast without really having to push hard. Tom hasn't been out much and with nothing to lose in the league he extended it for 107km. We arrived early and were on top for around 10.30 purposely so that we could chill out and watch the sky development. After a very quiet start the hill was soon scattered with XC hungry pilots from wide and far and after sharing my task around there was nothing else to do but wait… And wait…

With the sky developing further it seemed that RASP was wrong and it was clear the East was under a milky top cover as the West and North was developing well. Ominous enough for us to question the route and with time on our hands we were in constant discussion, but stuck with it and I agreed I would change it by 2pm if we hadn't got away.

With no sign of any bird activity and the wind coming over the West face, but the cloud drift from the East, we were all sat hoping something would develop and I was poised to just go for anything, but before I could a Brave pilot made the sacrifice and and pilots ran to the East face to see what would happen. 1 turn, 2… My glider was up and I started to run… But… It collapsed in the lee and three others beat me to it, they, however, also climbed so with the help of Lucy Ma, I relaunched and was airborne and immediately into a 4.5MS straight off launch.

In standard form the team were not far behind and all launched into a melee of punting pilots. Kirsty and I both made base fast and we set off with Tom and Laurence trailing us.

We pushed north and the sky to the east now looked really poor so our second and third leg looked doomed. Kirsty and I pushing on left the boys a climb or so behind and before you knew it out of sight. Kirsty was her usual climbing master and as got about 20km in she took a boomer that I couldn't get in and forced to push on.

Left climbing in dribble I was now listening to the radio chatter of the others as they all seemed to be converging on TP 1.

Making TP 1 the radio was silent and I asked for an update, Tom and Laurence were half way to TP 2 and Kirst MIA. Understanding I was now probably destined for a lonesome flight and into a very much less than optimal sky, I pushed on but was conservative in lift and stomping on the bar when not climbing.

Just past Bromsgrove I heard Laurence inform Tom he was 6km for TP and I knew then that I was only 7km behind and made an effort to really push. Staying up and making the triangle was going to be a little less impossible if we were together.

I hit TP 2 after a low save at Reditch and 8km later saw Tom and Laurence climbing low and pushed toward them 1000 feet or so above. We soon joined up and started to work as a team and it was immediately a relief and infinitely more enjoyable to be reunited.

We pushed on but having to milk all lift as it was now 6pm and the sky was poor. There were CU over Worcester and we headed for them and hopefully and elevator ride to cloud base that would see us on final glide. 18km out and the radio goes as Kirsty informed us she had made goal… I was confused as I hadn't seen here at all, how was she so far in front?

"Im going to go for the clouds over Worcester" Tom informed us and left Laurence and I climbing in a 0.8.

Laurence and I were working the dribble and bouncing in and out of the occasional peaking at 0.8 when Tome informed us he hit 3 up and we were off, full bar ahead. We knew that if we got 5500 feet we would make it in from 10km out and so once we found the climb we knew we were home.

After a final glide and a top landing to meet Kirsty and Lucy we debriefed and the absurdity of the flight unfolded.

Kirsty was confused by a radio message and thought were in front of her so she opted to push West under the MUCH better sky and she went on to fly a 98km free triangle alone.

Tom and Laurence had pushed West at the start and with the good cloud were able to leap frog us and get in front, luckily I was able to catch up and once again it was proven that team work really does make the dream work.

Debrief at the pub with chips and hearing about Mareks successful flight before heading home with grins on faces celebrating another brilliant days flying.