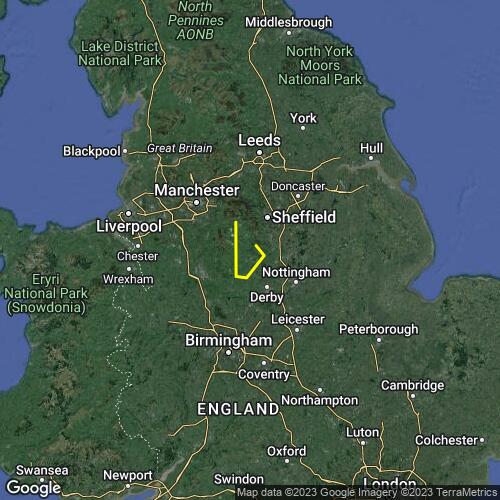 Not sure what my plan was today… Headed off downwind, seemed to get a good line in the blue where yesterday's convergence had been, went left a bit because I'm sick of bombing out at Chelmorton and wheeldon quarries, there were cus under the 5500 airspace so that looked the best place to be. Hardly any drift as I got further south, as forecast. Dithered over Ashbourne/Mayfield for ages hoping the sky would change-the best sky was heading straight to airspace, and there was high cloud killing thermic activity(or at least cumulus) between me and the line of clouds off to the west, and little scrappy nonsenses of climbs between me and Matlock. Grovelled my way back to Matlock hoping for convergence over the eastern moors or at least enough sun on the west facing ridges to keep it buoyant, which worked for a while but the haze thickened and the line of clouds that had formed fizzled as I headed towards Chatsworth. So I drew an undeclared nose on the xc league. No mulitpliers for that but fun day out. Was convinced someone would have done a proper triangle and someone else would have wiffled along slowly to Worcester, nice to find I did quite well with the day!