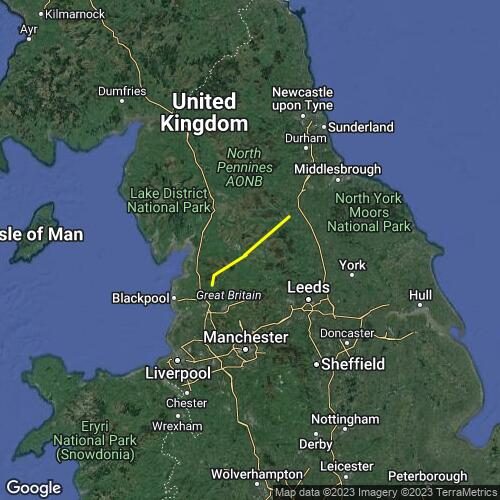 I've recently started to suffer from Parlick Plague again, it is a syndrome that affects sufferers in the summer months. Keen XC pilots can spend days, weeks and months attempting and failing to fly a decent XC at Parlick in underwhelming conditions. The syndrome is caused by Parlick's proximity to the sea; sufferers bimble about above Parlick all day in sea air, struggling to get much above two grand, only to look in the XC league in the evening to find out it has been epic everywhere else in the country. The symptoms can last months. Pilots all round the country fly epic distances and massive triangles, while at Parlick we just bimble around low in the rain and clag.

Parlick Plague is treatable, once diagnosed sufferers are advised to drive all over the country to chase high cloud bases and Tesco points. The treatment plan has a downside though, eventually all those that undertake this treatment are driven mad by the early starts and the insane amount of driving. So some stick it out at Parlick and hope for the odd good day and relief from the Plague.

Normally Parlick does have the odd good day, especially early in the season, but this year no good days have materialised, so the locals are ravenous with full-on Plague symptoms. To be safe, pilots from outside the area are advised not to venture anywhere near the Ribble Valley.

Sufferers had some hope that Tuesday could be a rare good day on Parlick, but it turned out to be rubbish as usual. One hopeful pilot managed 21km even though he never got above 2600ft in the sea air. This pilot got home to see the Peaks had a near six grand base and Richard Carter had flown a hundred kilometre triangle - they say it is the hope that kills you!

The forecast for Wednesday hinted that it could be one of Parlick's rare good days. The direction was more SW and the air was coming round from the south in the morning with little strength in the wind, meaning the air in the Ribble Valley would be off the land and not the sea at the start of the day - so maybe we could get away from Parlick in good conditions before the sea air came in to spoil the day…

The day started cloudy, probably a good thing as convection would start later, meaning the sea air would arrive later. The sun came out but there was little wind on the hill and no early cumulus. As we got ready on a blue windless takeoff, epic looking clouds formed over the higher ground not far down wind, but a massive area of thick top-cover was lingering to the south, threatening to ruin the day.

Soon after noon there was a bit more wind on the hill and the gulls were having fun, so I took a punt. There was little lift on Parlick, but I managed to scrape round to Fair Snape Fell. A cloud not too far behind the hill was sucking buoyant air up all round Fair Snape, I quickly climbed out. A cloud formed around me as I topped out at 4400ft -a mega altitude for Parlick with west in the wind.

Crossing the Forest of Bowland was easy as conditions were epic, strong climbs with a base at 5000ft and lift everywhere. 5000ft base in Bowland with west in the wind is a once a year occurrence, I was in dreamland!

As I got to the edge of Bowland I had to cross the Settle Valley. The Settle Valley is the nemesis for Parlick pilots who dare to try and reach the better conditions in the Dales. The valley is always damp with few clouds and often filled with sea air. I and many others have landed there way too many times. There was no sea air in the valley today, but thick top-cover had moved over, there was little sun on the ground for miles around in front of me.

I slowed down and took a mincing climb before leaving the high ground, I drifted with it as long as I could. Settle had some sun on the ground and there was a bit of cloud behind the town, I headed there. I made it across the valley but was now low, down to about two grand. I could see a pilot even lower on the hills at the back of Settle, it looked like Dean. I drifted back in a rubbish climb, but luckily for me Dean took a better climb out front, so I pushed forwards to come under Dean. The climb faded, Dean pushed forwards on a triangle mission and I bimbled around looking for more lift, I wanted to get to base before leaving Settle as there was no sun on the ground downwind. I took a few more weak climbs to get to base and off I went into the Dales… I had finally escaped Parlick and the grip of the sea air.

I minced slowly across the Dales, still no sun on the ground I knew I'd bomb if I got low, I wanted to stay high, so I took almost every climb, no matter how weak it was.

As I left the Dales I could see sun to the north, but the sun was too far away. I headed to a crap cloud above Leyburn, the ground looked a bit brighter there, but I lost a lot of height leaving the high ground and got nothing in the flats. I landed a little past Leyburn.

As I packed up the sun came down from the north and clouds started to pop all round me. At one point I had four buzzards climbing above my field - typical!

I enjoyed my trip away from Parlick and my Plague symptoms have eased greatly. I am hoping this is not the only good day we get this year…

… And Thank you Geoff for coming out to retrieve me.