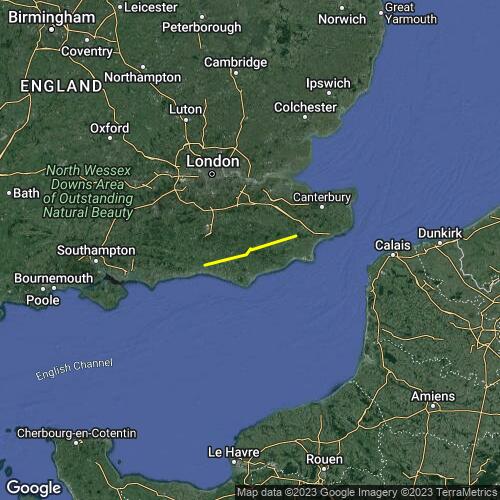 Bad night's sleep, and arrived late to the hill. Forgot heated gloves and radio. By the time I was ready the wind had already gone cross and strong, and everyone else was high while I was scrapping low. Eventually I managed to get a bit above the hill and tried to cling on to a very bumpy thermal. Got quite high and knowing I needed to get north set off for a nice cloud towards Hassocks. Got totally outclimbed by two other gliders and was left scrabbling low. It was only 10.30 so I just tried to stay positive and hold on. Eventually I got up as the sea breeze came toward me. The rest of the flight I was just trying to get inland and ahead of the sbf as far as I could. Little inversion/wind shear at 2,800' made it hard to get to base and quite bumpy, and the odd time I did get to base it was booming and I was scared of getting sucked in! Mincedmy way on along the route to Margate, battling some negative thoughts. A sandwich and wee improved my mood, and I managed to catch a decent low save right back up to base. It looked like the sea breeze was going to come in and cut me off, so I tried to cross wind to Ashford but didn't quite make it. With more positive vibes I think deal would have been a better route choice, although not quite sure it was possible with sbf far inland Lift straight to the station. Good flight and pleased with my performance given bad mindset. Next time more positive vibes!