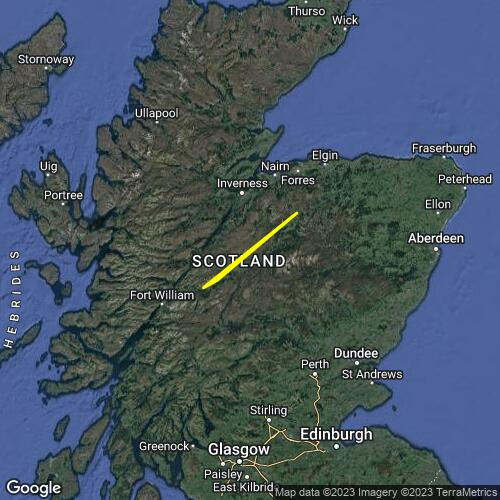 With a forecast of 2400m+ base and epic convergence, a good crowd pitched up at Creag Meagaidh, including rare sightings of Mike Cav and Dean Crosby.

A task of 135k down the Spey valley to Grantown and back was set, and with the first clouds popping, we were off, straight into a rocket to cloudbase at 2000m. Roll call of the first gaggle - Mike, Dean, Barney and me - that'll do - let's go!

The convergence set-up along the edge of the Monadliath plateau and we rolled along it getting steadily higher with each cloud, watching Barney way down below, worrying the deer for a while before he eventually broke the inversion and joined us. By Aviemore the clouds ended, and we needed to take a long detour north to reconnect with the convergence line which took us to within range of the turnpoint, which was a long glide out into the valley and back to the clouds.

The journey back was a bit faster with a slight tailwind, but we got off the convergence line at one point, getting very low and having to mince it to survive. Sadley Barney's mincing skills were not up to the task and he landed on the plateau, and had to watch that climb consolidate and take Dean and myself up to 2600m to rejoin with Cav. From there it was a glide onto the end of the Meagaidh range, and an easy ridge soar for the last 10k into goal using the southerly wind that had now set up.

I couldn't resist extending the flight to the west end of the range and back, with some mellow soaring in the evening light.

Such a rare day to get the super-high base over such a wide area, and so much better when you get to share it with a top bunch of pilots!