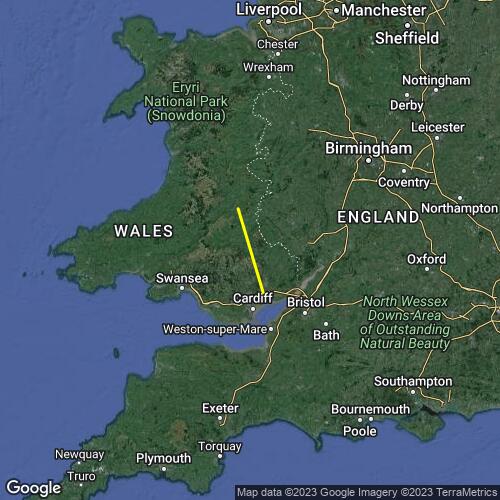 This was a BCC task with the North Devon team. We looked at the wind forecast, which was due North at all altitudes, and set goal at Newport Golf Club. On the hill it took hours before cycles started coming strong enough to soar & climb and I launched at 2pm. Intending to get high and stay high I found the lift well out front from the slope and stuck with it to base at 4000ft. Climb 2 a few km further on went to almost 5000ft. I was with some experienced pilots then, who spread out to search for the next thermals. At llangorse cloudbase was 1000ft lower, and looking SW ahead to Cardiff the sea breeze convergence showed, but no sign on my track to Newport. I got low on the glide across Crickhowell to Llangattock and had to scratch in zeroes and 0.5 up while drifting over the escarpment. The bubble released just before the pond on the Moor, and I only got low again at Pontypool until I drifted back with a weak climb that eventually got me up to 3200ft enough to glide to goal. The retrieve is another story, having missed the last train to Builth Road from the station I landed near. Thanks to Andy Marks for the epic retrieve from Abergavenny. The Ed Sheeran concert was great too. It looks like the rest of the team were talked out of the Newport goal by others? And they headed for Bridgend. Was that you Viv?