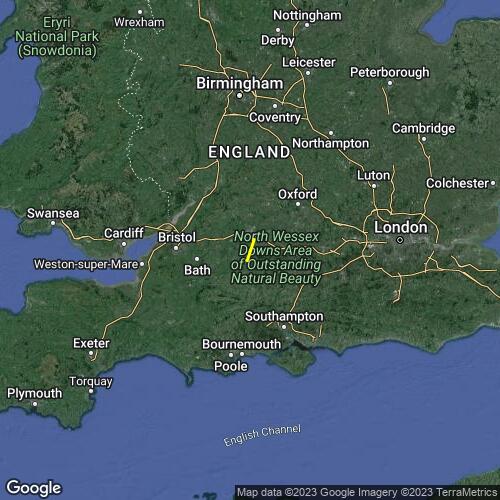 Before and after my morning coffee at Honeystreet, I noted the throngs on, and sometimes above, Milk Hill White Horse. I hadn't even considered Golden Ball until I arrived at the car park on my scooter to see three two-liners thermalling above it. A big gaggle was climbing out from MHWH, but I knew there'd still be a lot on the hill, so I turned east to Golden Ball.

As I walked up, the three big cheeses (possibly Joe Dart, Wez Murch and Andrew Kruszynsky) sank back down to near launch, but then climbed out with whoops of joy as I arrived. So I had no thermal markers, but on the other hand, I had the entire hill to myself.

I got my wee Yeti (chosen today for ease of transport) ready quickly, and launched to chase some gulls out front. A few then climbed better along to the east, but when I got there, a huge flock was thermalling in front of the ridge. Most quickly went about their business, but a few kept going up, showing me an easy and steady climb out.

A white Gin (Ralph Mason, chasing TVHGC competition waypoints? ) arrived from Milk and joined me for a while, but then headed back west as I continued my downwind progress, reaching about 2,800 feet ASL. My day's ambition was simply to do the 10k needed to enter the flight in the league; I feared it might be a one-thermal wonder that didn't achieve that, but I found more lift just before the A4 and drifted on without going up or down much.

As I approached Barbury Castle the lift turned into a proper climb that took me to 3,400. But then, over Chiseldon - flying with only my little Syride instrument - I started getting absurdly worried about how close I was to Brize Norton airspace. The answer was: still a very long way off, but in trying to find out I managed to switch the bloody thing off. After a bit of faffing I got it switched on again, but of course that meant my XC league score would be only the first 16k. If I'd broken the British record I might have pleaded with the league administrators to stitch the two tracks together, but for an extra 4k I won't trouble them.

In my discombobulation, I turned unnecessarily north-eastwards and glided to the ground. I walked on a traffic-free lane to the M4, crossed over it, and hitched a lift to Chiseldon. Alan Birtles very kindly offered to come and get me, and scooped up Andrew Hancock from Wroughton as well.

It's nice to be reminded that my six-year-old EN A is perfectly capable of taking me on cross-country adventures.