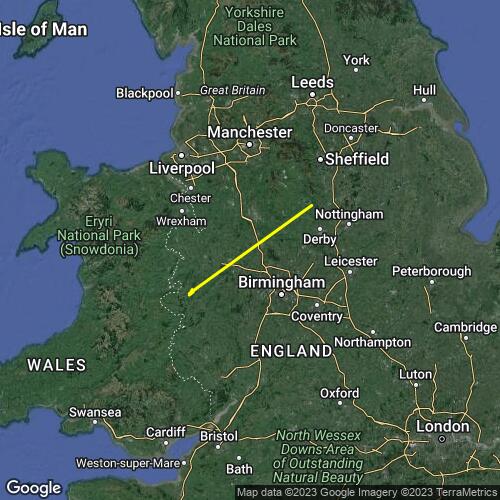 What an adventure, it was decided the Mynd was the place to be, so i took a drive down wednesday night in heavy rain to take off ready for the morning, 260 miles. Following morning still cloudy with a little rain, so picked up richard Meak Chris Fountain Jake Herburt and Rahul from church Stretton. By the time we got back up the hill just after 11am the sky was getting better, rain had stopped and wind felt good. So decided to fly soon after waiting for the sky to improve front and back of the hill. However though it was very lifty with nice smooth thermals to 600-700m there was nothing to go back too. After over 2 hours we started to get proper climbs and the sky was better behind so it was time to go. Richard jake and rahul got away ust before me, so went out alone and got a second climb that took me to base before crossing the stretton valley. There i could see the lads working something so headed over high but found it broken so pushed straight passed, mr impatience. I then took a line following the small ridges and clouds, and eventually got a broken climb that eventually got me high again. The others went east of me getting very low and thought they were down, but they weren't. I then matched on from broken climb to broken climb, i needed to be high to cross Telford, and passing cities scares me for some reason it a phobia. I got a realy good climb just before the crossing that got me to base, as then jake came over, i pressed straight on to get it over with, then got separated from Richard and Jake. I then got very low as i then watched the others sky out, though then after some time got high again only to get super low and waving to sunbathers in a very posh house. This took 30 minutes from 100m agl back to base or near. After that i started to concentrate a bit more and try and stay high and not push on so much, the highlight flying over alton towers. I landed 6 hours later in Wirksworth, where a freindly couple give me a lift to the train station. No the job to get back to church stretton, this started easy with ticket £39.00 any time back. However not one taxi company would pick me up fro Church Stretton and after 21 calls decided i had to get off at Shrewsbury. Though i had tried to get one pre booked there was none available, but luckily got a Go Carz highly recommend. All the way back to the top of the Mynd £24.90 and arrived back at 23.40, 3 cold sausages and a avocado that was my tea as never got a chance in any station as no time. Went to bed in the camper but could not sleep as think there was still too much adrenalin in my system, so up at 5.45 quick breakfast and the 260 miles home, back by 11.15am. All and all an awsome day sort of flying with others, next time leave keys on the car as i though no way anyone will go down to drive the camper down, but chris did. This would of saved hime hitching down me a taxi and also being in my van by 22.25.