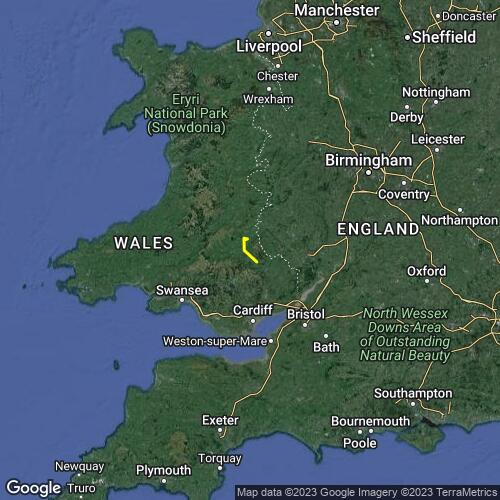 Up Magic Mountain went the North South Cup. The vast majority positioned themselves on the ESE-facing take-off, which had the wind on it. A small splinter group - Hugh, Kirsty, Mike Coupe and a couple of others - headed up towards the summit, thinking it would soon come on to the southerly-facing main bowl. I followed them, imagining how smug we'd feel when the throng on the other launch would have to bundle up their wings and struggle over.

Instead they started taking off and climbing, while we contemplated the crosswind and the huge boulders around the bit of very shallow slope that we'd positioned ourselves on. I walked back down, Hugh did the same, then Mike; Kirsty eventually flew down.

Once the crowd had thinned out a bit, I launched and managed to climb with a few others back towards the summit. After a bit of dithering, I then found a therml of my own, and became the target of a gaggle of ten or so. That stressed me out - I tried to be polite by not turning too tightly inside the circle, but instead managed to stop Richard Barber turning tightly enough, for which apologies.

Anyway, having no ambition to accomplish the triangular task, I set off in happy solitude. I sank off the east end of the Black Mountains above Llangorse lake, but managed to find the expected lee-side thermal, and started dribbling northwards. Having reread Flybubble's excellent review of the Skytraxx 2.1, I decided to try for the first time to concentrate on using its thermal assistant, and blow me down - it worked!

Approaching the Usk I saw a blue Zeolite heading north fast, then stopping to climb, so I flew under it and gained a bit of height. It then shot back south, too fast for me to follow. With my instrument now changing its mind about what the wind was doing, I was unsure what to do next. A field with a tractor and many red kites kept me up for a bit, but none of the birds had any intention of climbing high, so they were of limited use. I decided to land on the correct side of the river at Llyswen, and found that Ben Kellett, on the blue Zeolite, was also down there. I wasn't too disappointed with 26k on a slightly tricky day - a lot of the big cheeses had landed early.

Ludek Munzar kindly asked if anyone needed a lift, and I managed to reply "Yes please! " before anyone else. Ben K and I just had time for a pint at the Griffin Inn before Ludek turned up and took us back to the Magic car park. I then I fished Ben Keayes's keys off his van's spring and drove to Brecon to pick up him and a few more. A very satisfactory end to a nice day. And the South won.