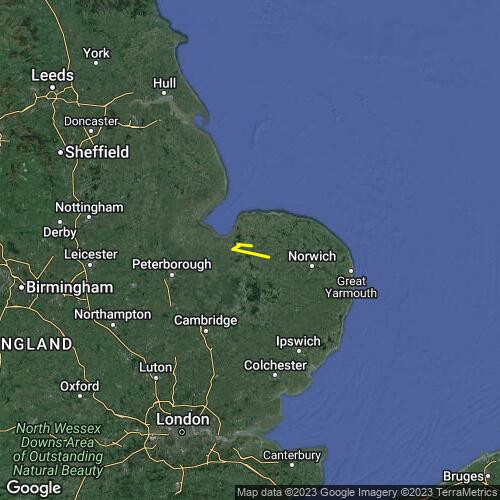 Perfect forecast for XC from NHGPC, not so perfect start to the Day.

Ot to field nice and early being very organised, and thinking I've but my graft in for the weekend, now to concentrate on Flying. Well how wrong was I. Made a cock up setting up winch resulted in tow lines getting crossed, 800mts * 2 lines completed tangled. 3-4 hours later, after watching numerous gliders climb out. I got to fly at 15:00 o'clock, having needed to run what felt like half the runway I didn't have a lot of hope of climbing out, but the last third I had quite a lot of lift and straight in to a thermal, Oh can't beat that feeling.

Seeing a Pilot at about 3.5K I could only get to 2.7K was quite frustrating, but I moved on down wind, after a couple of climbs I got the feel for the day felt nice and comfortably and started pushing on racing the day Glide climb moving on each time the lift became weaker.

Had my best climb over Kings Lynn I had the choice of crossing the River, Knowing others had declared Rutland or at least headed to Peterborough way. But I had a bit more south east than pure east and ENE which was forecasted and going up the A17 to would have been a nightmare retrieve on a sunday evening, with a bit of convergence about I tried flying back. Seeing the blue sky creeping west and me pushing east it was only a matter of time before I flew in to the colder air, but it was great fun, trying, I got within 12-12Km of getting back so really please with that, and hour earlier I reckon I would have made, it. Landing at almost 6 O'clock with perfect blue sky and a strengthening cold air mass from the east, I felt I had pretty much milked the day as much as I could without going further down wind.

So two Lesson learnt today and added to my Jar of experience. (Experience I hope not to repeat)