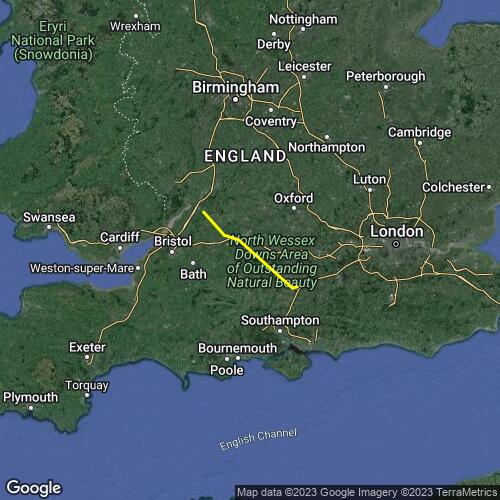 Light westerly maybe 2 to 6mph, variable. The sky looked okay, but how to get up there. Today, more than ever, was a day to be ready, but also patient.

It was Graham who teased us with the first climb of the day, quickly followed by Joe, Agi and myself. Joe up and off whilst the rest of us struggled. By the time the others turned to head back to take off I was halfway between Joe and take off. I hesitated then, as Joe started circling, opted to leave, albeit lower than I would have liked. I then spent the next 90 mins chasing him round the sky, trying to find out what goal he'd set. Lots of shouting, but couldn't hear his reply. Climbs ranged from ragged 1ups to solid 2.5s. The challenge, as always, was finding them.

At Swindon we parted ways, him heading for Reading, and me for Combe and beyond. As I passed over Combe I spotted an orange Phi quite low so pressed on. Later as I landed just past Whitchurch they cruised past at base.

Landed, hitched and got a lift with an environmental worker and campaigner - good chat. Train, train, train then cab. Let's just say it was dark by the time I got to the car!