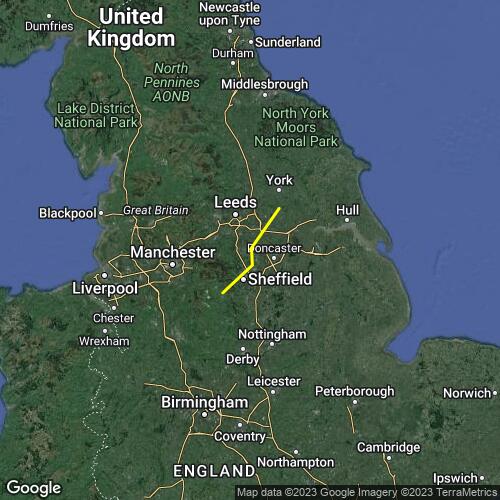 Eyam was the place to be but had a short window. Climb outs started at eleven and that allowed us to be the first to escape what can be a busy and shallow site. Jim Golds could probably give more detail but the climbouts weren't happening much past 1pm even in a decent looking sky.

(copy the above into your browser address bar)

Lot's of big flights that day - Hamish, Richard Carter, The Polish 303 lads all getting well into North Yorkshire! Locals like Helen Gant putting in a good show too.

We were in orbit above Sheffield with the difficult section starting around Wombwell, where heavy cloud formation had led to shade out along the route. There were some stonking climbs to be had but they were fewer and farther between them. The wind had gone west in the flats which made the goal of Filey realistic but was pushing the gaggles into the Upton Corridor next to Robin Hoods/Finningley airspace. The DSC have this raised 500ft to 4500ft on good SW days.

My keenness for messing about near the ground slowed me down but you just get to see things closer up. It's always fascinating to see places you pass frequently from the air. I've never flown this route before so it was an eye opener to see the M1 flyover, A1, Barnsley, what's left of Ferrybridge, East Coast Mainline, M62, Wakey, Leeds in the distance… The list goes on.

As York came into view, Martin and I were getting low. It'll be our turn for chips at Filey another day. I did get a welcome pickup from John and his daughter Jessica. He's a shorthaul pilot out of Robin Hood's and was fascinated we fly these kinds of distances. I told him we deliberately seek out the stuff he warns his passengers to strap in for. I think it's only a matter of time before we see him on the hill.