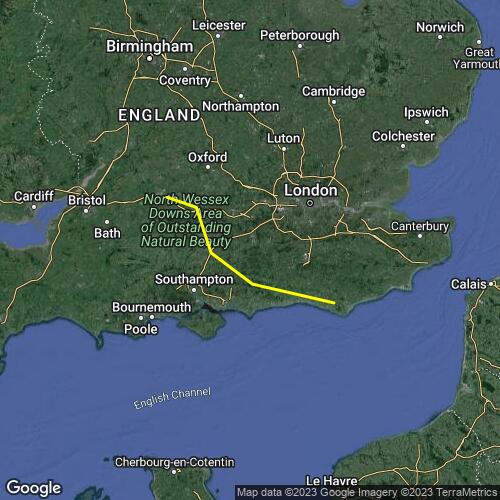 Did we sound like idiots talking about Didcot and Swindon stood on take-off, cloudbase 1200 ft above us, 6/8ths cover.

The first section was a series of tiny glides and small cores… Base was low, but the thermals were gloopy and wanting us to stay up. Up towards Midhurst and the sky turned on, with base up to nearly 5000 ft. The wind had switched round a bit, from NE to E, and now SSE, just 60 k into the flight.

From Sussex, we can do 130 km in a straight line from the Dyke to the tip of Kent. We've never really done much going west - Andrew K and James C managed a new Bopeep site record of 120 in March to Andover but clipped airspace - so that was an eye-opener.

So, rather than heading north and kind of flying in a circle, Mark suggested we plug on into a westerly headwind to try and get as far from Sussex as possible, so that's what we did, and 7.5 hours later we were back nearing glorious Swindon, flying into the murk of an approaching warm front. 150 is the furthest so far, but obviously a lot more is possible… 250 into Dorset or Wales on a good day for sure with a tailwind.