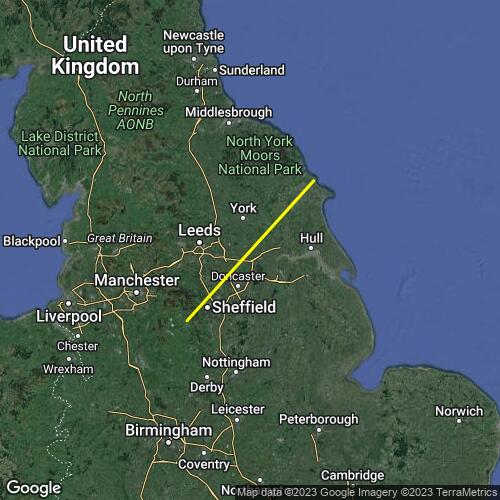 My apologies to the derbyshire soaring club but I may be rude about your site in this story.

I'd flown Eyam once before when I was a wee one year old pilot, made it to Sheffield. This site is a hazard perception test, with pretty much all the hazards paragliding offers. I had set a goal to Filey, but on this day my main goal was to get up and away from the walls, trees, powerlines and fences that feel like they are actively trying to grab you out of the sky.

Happily, I timed my take off well and then Eyam starts to make sense. You get a fantastic view of the Peak district, the place I have fallen in love with more than anywhere since I started paragliding. There was a beautiful line of clouds over Stanage and Sheffield, and a strong gaggle of the Dales crew who still let me tag along thankfully. Fast and high!

We swiftly made it to the 4500 airspace, where it became rather shaded. I couldn't understand why most of the gaggle had gone left, so I went my own way, and so did fellow pennine voyager Richard Butterworth and the catching Alex Colbeck. This worked well and we emerged as leaders, albeit I was separated from them.

Over the M62 and the airspace was dealt with - and I shot up! Conditions were epic at this point, and I was enjoying it hugely. Over 100km, first of the year woohoo!

It's strange, but I never really felt in doubt about getting to goal when I was in the air in the second half of this flight. It just felt right, but I still made sure to work everything as I was getting towards gliding distance. Alas, I sailed over Filey with 3000ft to spare and the view was astonishing. Landed in goal where Alex and Richard were, and Jake soon joined. A new pb for me by a smidge!

Richard and I briefly attended the Filey Folk festival, and had a simple retrieve back to hathersage Station where the cars were. What an amazing day and wonderful conditions, good old Eyam!