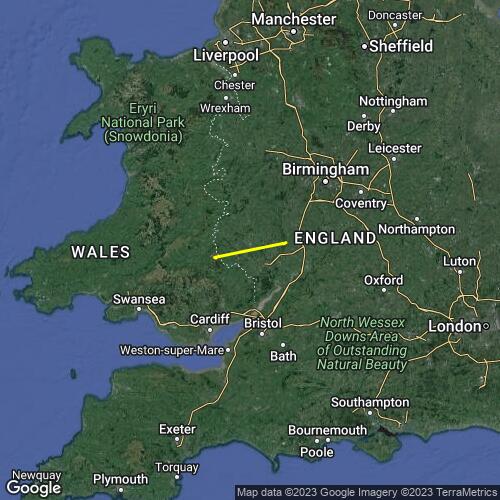 It was 9am when Agi and I set off for the Malverns. On arrival the wind was noticeably stronger than the forecast had predicted. Within 30 minutes take off was peppered with pilots. It was going to be a busy day!

I took off reasonably early and flitted between the many gaggles now starting to develop. Climbs to base fizzled at about 3 grand, with the air gnarly as though there was an inversion. Once we could see clouds over the back we were off. Rob K had sent out a task to Carmarthen which, although hugely ambitious, had been generally accepted.

Several large gaggles departed from Kettle and the Beacon, and over the next 2 hrs or so they broke up and reformed as pilots switched up, or switched down gears. Over the same period base rose to about 4,500ft. I left with the King and Zeolite GT then hooked up with Tim and Lawrence before decking it in Neverland - never get a phone signal, never see another living soul other than sheep, never stop walking!

In reality I was very lucky. After walking for over 90 minutes, passed by 3 cars (2 going the other way), the fourth car stopped and an ex paraglider pilot and off duty policeman offered me a lift to the nearest point of human habitation. As often happens, once conversation got going they very generously opted to drop me off at Abergavenny stn - Result!