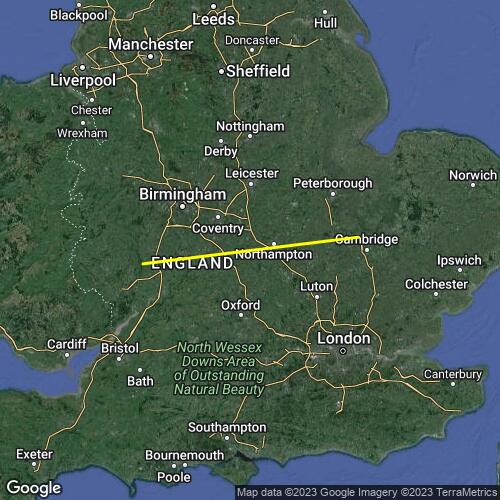 The decision was made on the morning. We had looked at all possibilities as a small group the night before but had agreed that if the forecast held we would indeed be heading to the Beacon.

I collected Joe and Laurie and we met Kirsty on route, Ollie had already sorted a lift at about 4am and we meet him there. Arriving at the hill early is a necessity and I especially hate to feel rushed when flying XC so I like to be there for the day to develop and we were on take off for about 10am ish. Perfect.

After setting up, installing Joe's new reserve for him we then went about the task. I had set one at Cambridge, but after a short discussion Kirsty and I thought that pushing it slightly North menat we could continue on if the day was fast (it wasn't)

I launched first of our group, the sky was working and there was already two climbing well being the hill. We had gathered quite a group on take off as others wanted to scan our task and asked our radio frequency (not something we share much, we talk particular nonsense to eachother and not just about the flight) but today we had a few extras on the radio. Off launch we formed a lovely little gaggle and there was around 10 of us all working together. We got to a reasonable height and and wasted no time pushing down wind.

The day was looking good, the sky was great and although not booming it was working and reliably. Pushing on I got low early having led out and conned by a lying sailplane and spent two thermals chasing the group. I rejoined at Banbury and we all pushed on together.

Over the flight we took it in turns leading and swapping places as it was up and down and at one particular point near Grafham water we got the lowest we had before finding a tricky but enjoyable climb back to base.

The glide to goal was long at about 10km but with instruments saying I needed a. 6:1 ish glide and also telling me I had 12:1 we all went for it. Kirsty was high and Ollie below me but we surfed the line in together, making tiny adjustments for best glide. We took a small climb 2km from goal for about 500 feet but was absolutely not needed as we arrived in the most buoyant air of the day and couldn't get down.

I picked the landing field and put it down to take pictures of the others as the followed me. A couple who watched us land were greated by Ollie and his offshore charm rehearsals have worked well as he got us all a lift to Cambridge North and we were off on the next adventure… Home. For me a Tuesday morning car retrieve from Malvern that Frazer has made all the more simple.