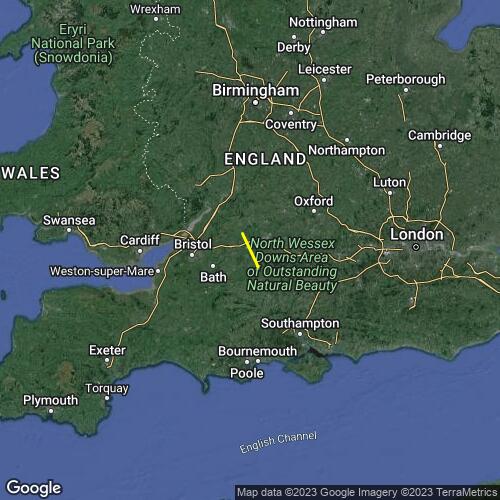 Having visited milk hill a few weeks before without much flying and walking the area I was keen to return on a good day. Looked to only get thermic a bit later in the day with the morning looking hazy. Tan Hill was my choice liking its bowl shape and interesting shapes. Met two pilots on launch asking if they were planning on XC. One was Tim so decided to join them. After a while of little thermals and side landings the odd cu was appearing out front. May great pilots to watch and learn from. Big gaggle going off and returning. I pushed forward to where I thaught the themal would be. I hooked it and didn't let go. Out the back it was all blue and found a few climbs and got in a gaggle. Ended up under Tim and we pushed on to the streets developing out front. But we were on a death glide! Didn't find anything low down and we bombed out. He know of a pub near by so a quick half and the hitching began. He went back to Bath and I started walking back to launch. After several miles the feet were aking a bit. Was a glorious day and the sky looked fantastic with streets all lined up. I could see the odd wing a pin pick working thermals. Darn! Then a guy out for a dive in his pride and joy offered to drive me all the way back to launch in his 1964 MG. With no room in the boot which is tiny I held the bag behind my head. A great chat and back to the car in style!