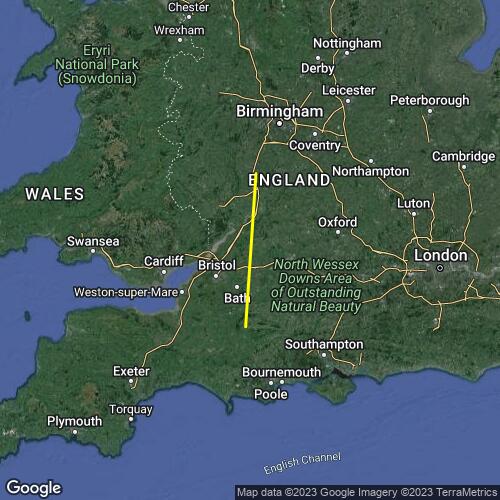 Accidentally the right place to be.

With a forecast that showed a broken forecast with lots of potential to the east I had decided that I was going to try Milk Hill, however, When I got up in the morning the forecast looked slightly worse and I questioned if anything really big was possible anywhere?

I message Sean Simmons and he said he wanted to go XC from Mere, (of course I nearly fell off my chair). On the morning forecast and the fact that Sean was so committed to going XC he actually didn't want to drive his car to the hill, I decided I would give Mere a punt.

The forecast showed broken 3 star forecast and patchy cloud downwind of Mere, but having experienced this before I thought that it may be a situation where there was enough sun on the ground to provide thermals good enough to present consistent climbs.

Arriving at the hill the sky was blue and didn't look productive, but was promising. The pilots on the hill mostly still had their kit in bags and one was soaring. I went about my normal routine of sorting my kit before ANYTHING else and Sean did the same. I decided a goal at Worcester parkway would be set, It was very optimistic on the forecast, but as Sean hasn't flown a 100km in the UK I thought it was the perfect goal to chase nd the 117km goal flight would provide decent league points. The others on the hill had heard my talk the night before and all fancied giving it a try so we had now formed a small group of 5 pilots who all fancied trying their luck.

It took an hour of taking slow dribbly climbs before it started to turn on. I had climbed to around 1000ft above take off and was pushing back to the front of the hill when I saw the group of 4 had continued to take the 0.8ms climb over the back and had now reached a point of no return. Thinking it was doomed I decided to join them and hopefully patience and team work would form the perfect combination.

Unfortunately optimism wasn't enough. Arriving at Long Knoll 2 km behind the hill most pilots were low and now ridge soaring. The hill was working and there were small bubbles of lift so after around 20 minutes it popped and Sean, Myself and Richie all took climbs. Peaking at 1ms it wasn't anything special, but I knew couldn't sit on the ridge longer and thought if I stuck with it, it may break higher up. Unfortunately, although working hard Richie couldn't hold onto the climb lower down and was soon on glide to a landing field, but Sean stuck with me and we were rewarded with an extra.5ms over the forest.

Pushing on the sky was still blue, but down wind just past Frome CU were now well formed and it looked very promising.

Sean took a lovely climb over Frome that I joined but as I pushed on we got a booming 3ms climb on the downwind side of Frome. I was certain that we just needed one more climb and we would connect to the now well established sky. I found that climb to the East of Odd Down and although it certainly wasn't a pleasant climb, it was going up so I was staying with it. Despite working really hard Sean lost the climb at about 1000 feet and couldn't find it again and that saw him fall away at Box for around 35km. He did the hard bit and severed ties with the hill, but made a couple of mistakes that saw him on the deck sooner than he liked. (consistency will sort that)

Now on my own I pushed on into what looked like an amazing sky. I was worried it would spread out or become all filled in, but my morning prediction seemed to be correct and the sky was now an epic XC flying sky.

The day wasn't consistently booming and climbs varied from 1.2ms to 4ms so it was slow going, but it was lovely and warm. I cruised over Minchinhampton and to the East of Selsley with ease. Knowing Gloucester would produce, I had to ignore it as the sky was looking good to the East which was downwind anyway. Gloucester ATZ is GND - 2100ft so I topped up to 400feet before gliding over and taking a climb to the north and pushing on.

I only got low once after that, but I got really low and was under 1000feet near Pershore before taking a 2.5ms climb to 4100feet. Goal was easily achievable now with a single glide and I did toy with the idea of continuing, but the field at the train station was very tempting and so was getting home before 6pm. The day definitely had more in it but a slow bimble to to increase my declared points score didn't seem worth it when I could hear the train station speaker, so I spiraled down and landed at Goal (Worcester Parkway)

Sean rang within a couple of minutes to say he had got my car and would pick me up at the train station near my house, Which he did, with an easter egg as reward for my efforts.

A great day and hoping to share more with Sean and anyone else who decides they want to join in the fun. (I missed my usual team and XC flying is always better with friends)