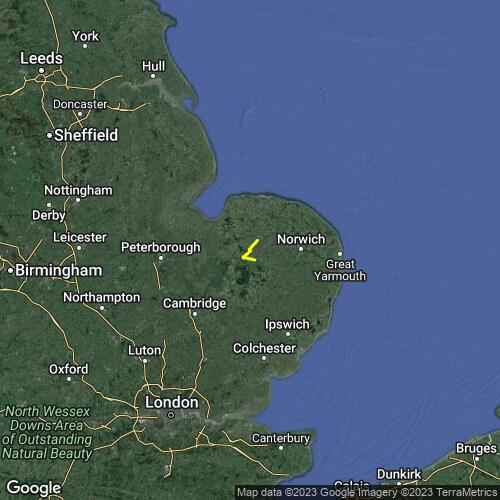 Been a long lay off for thermal flying for me, and with only 30 mins of thermal flying or 30 min of any flying on this wing know it is thermic and a very cold airmass, the obvious pre flight nerves were running high.

Finding that first climb away from off tow is always the most stressful time of the flight; for me anyhow, this is all made harder, when you are responsible for running the field, responsible for going through a Tow Conversion, earlier in the day, stood down for the afternoon due to the thermic nature (Come back to this later) and taking it turns on the winch. So I find it hard to multi task on all fronts and to be able to fly at your best. Watching quite a few already sky'd out I was getting a little anxious trying to free myself from the shackles of the filed, and did not have time to program one of two XC options, Downwind distance, or Triangle, both already prepared but yet undecided. Wind a little stronger than forecast so triangle was always going to be harder but good sky and high base would make it possible.

Anyway my turn on the line, David Martin had the line before me and was doing well, so had a marker for when I released. (He also flew again after me and did a 50Kish flight also on here). I flew under David and sure enough there was the climb, so steady and smooth out of the field 2.5-3mps. Enjoying the wing, understanding the feedback. Tops out around 4250ft. Start making tracks down wind, still undecided on what route I'm taking, I see a glider further down wind, according to my Buddy list on the XC Tracer Max it is Bill and he is 2K away and at my height climbing slowly. (He took off about 30 mins earlier), and seemed to be heading back towards me, I assume for the triangle. I was some what higher so didn't follow, and thought I have not gone out far enough yet for a triangle so pressed on down wind, eventually topping up to 5180ft pretty much touching the wispies of what appears to be a decaying cloud, pretty blue down wind, few more clouds in the distance to the East, cross wind, but still blue a blue hole and fairly blue back the way I came although probably a few more options cloud wise. Down wind was the better option from 5200ft you would expect to hit something, but with the responsibility of the tow conversion I thought I would be back late evening and wouldn't have time to continue the tow conversion in the mellow evening air. So decided on trying cross wind for the triangle.

This is where I ran out of skill and experience, I went further south than I anticipated, thinking I know the area reasonably well and the airspace I didn't realise how far south I had gone, thinking I could see Shipdham airfield in view (It wasn't) I thought I couldn't see the cranes that live there, but with the excitement I didn't rationalise that I might be looking at something different. So when I turned East I realised I was closer to the danger Area which will now be to the south of me and downwind. I needed to cross North for quite a while in a cross wind, thinking I didn't have much room to take a thermal. After a very sinky glide I did get something started turning but sure enough it was taking me to the danger area. PLUS I saw a decent cloud to the ESE with a sail plane under it, at still over 2K I thought I might make it. I DIDN'T.

Good lesson learnt, on the ground post flight review I had a lot more room to take the thermal higher without worrying about the danger area and I did what I always tell others less experienced not to do and that is is if you are in lift and low stick with it, I DIDN'T take my own advice here. So I need to spend more time in the air reading the airspace around me even if I drifted into the area at my height I could well have been high enough to not actually enter it giving me that extra time and height to glide clear.

All in all Valuable day getting to grips with the wing and hopefully learnt something for future reference.

On a final note of interest, although Bill was quite away north of me, when I found the climb that could have saved me if I stayed, he started climbing at the same time, that's quite a big area of lift and on a good day its not like trying to find a needle in a haystack, even in the flat lands.