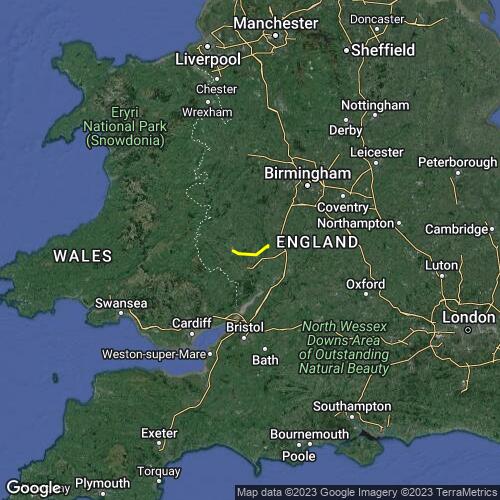 Day two at Malvern (sadly, day one's 52k flight to the Welsh border came before the XC League reopened). On Pinnacle Hill, we seemed to be between a superb cloud street stretching over the Worcester Beacon, and another to our south. A hang glider launched, got low, but managed to establish itself under the Beacon street, and a few paragliders then followed the example without getting too low, so I launched and did the same. I was able to stop circling at 3300 feet and continue going up in a straight line for a while.

I'd decided that I didn't fancy landing in the middle of nowhere today, having got away with it the previous day thanks to a lucky lift from Longtown to Abergavenny station, so Hereford was my target. The air remained buoyant before and after Ledbury. As Hereford approached, I realised that to go further, I'd have to shoot the gap between the two danger areas to its west, as I'd done the previous day. That confirmed my decision to submit to station suck; as I lost height over Bishop's Meadow, a bit of a hubbub came up from the spectators below. "Is that fun? " yelled a teenager as I touched down. "Yes! " I shouted back.

At the station I met the hang glider pilot, who'd unexpectedly bombed out near the city, stashed his wing under a hedge and set off back to Kettle Sings to get his vehicle. I think paragliding suits us slackers better.