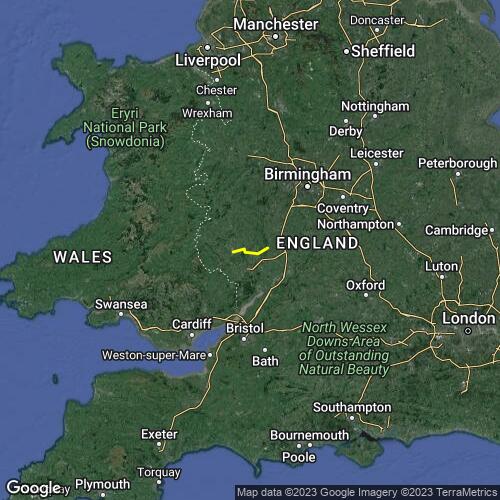 A third day at Kettle Sings. Lighter wind was forecast, but it was far from nil, so my resolve to try a triangle was wavering. Indeed, Barbs made the air look quite spicy as he practiced multiple hops and landings. A couple of wings went up, Phil Fouracre went down; but he found something over the landing field, and Viv joined him as he climbed back up. I set off to exploit their effort, and climbed swiftly with them and a couple of others to over 4,000 feet. My instrument showed wind of about 14 kmh; on a whim I turned and headed downwind, realising almost at once that no one was coming with me, and it was too late to change my mind and head out front with the gaggle. No matter; I was under a sumptuous cloud street, and staying up was easy - in fact, I had to big-ear my way out of the cloud at one stage.

The next climb had the wind speed in single figures, so that I began to regret my decision not to go for a triangle. Reaching 4600 after Ledbury, I was getting very cold, having decided not to wear today the thick flying suit that had kept me warm on the previous two days' flights. Hereford, with its station, looked inviting to the south-east. A brief diversion to the north, towards a juicy cumulus with a sailplane and a hang glider under it, proved unsuccessful as the cloud fizzled out. So I made my way towards the city, enjoying a few balls of a cricket match (Bartestree and Lugwardine CC, I believe), before making my second approach in two days to Bishop's Meadow. Several children and their mothers seemed impressed; one boy asked if he could jump on my wing. "I'm afraid not, " I said, "you need proper training to fly one of these. " "No, " he replied, pointing to the spread-out fabric, "I mean can I jump on to it? "

After the train journey and the nice walk up from Colwall station, I made tea for Viv and Phil, who had indeed had a lovely out-and-return. I must be a bit more ambitious next time - particularly now that I've found that my Calypso flies very nicely indeed.