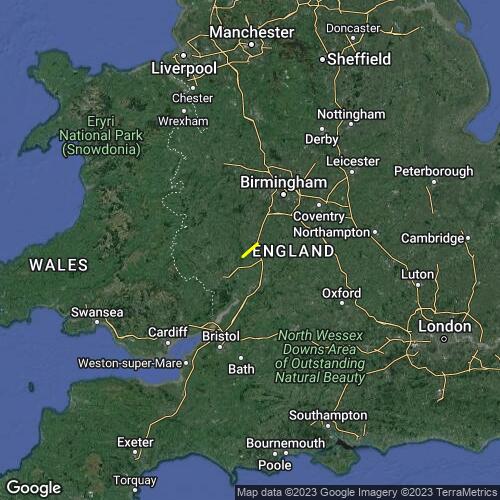 The final day of 4 lovely flyable days at Kettle Sings. Very light winds and loads of pilots out to play but, as usual, no one wanted to be first off so lots of hanging around and socially distanced chatting going on.

Eventually a couple of intrepid souls took off and climbed slowly away. Phil was clipped in and decided to take a punt and join the lone wing wafting about low down. It nearly didn't pay off but a bit of patience, and swearing apparently, and things started to look up. I joined him and together we worked the climb up the front of the hill and the massed horde joined in! Up we went, steadily turning, all playing nicely until decision time. A few left to go over the back but most flew forward taking advantage of the light winds and aiming for triangles or out and return flights.

I hadn't made a plan other than to go with the flow and see what the day offered. Peggy, Phil and I flew together for a while and then I headed on out the front towards some decent looking clouds and other wings I could see in the distance. I had some good climbs, a bit bouncy, but several times found myself just gliding on, easily gaining height and just enjoying the views out to the Severn.

There were wings at height everywhere, quite a few aiming for triangles but I decided to make an out and return my goal for the day, as I wasn't too confident of making it all the way round if I tried to be too clever. With hindsight it probably was the day to give it a go but I hadn't made it out to the M5 at Worcester before and really wanted to get all the way back to the hill.

I turned at the M5, started back and found a massive sinky patch but fortunately I had another wing not too far away in a decent climb so joined him. That climb took me back up, drifting all the time back towards the hill so all that was left for me to do was glide on back to tag the finish at take off.

"A grand day out" and my second XC on the lovely Swing Helios RS, what's not to like?