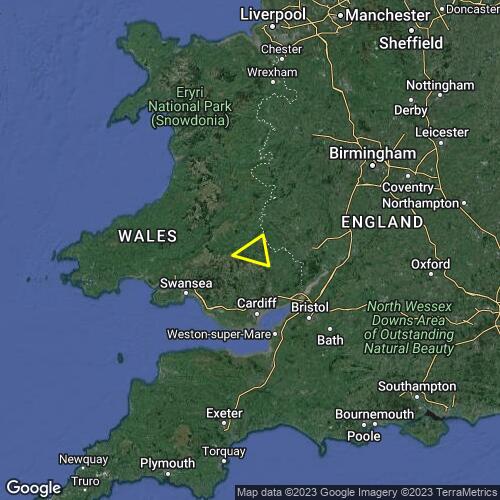 Arriving on the hill a little late there was already around 12 pilots laid out.

Quickly got the stuff out and grabbed the task from Simon T, from Blorenge to Pen y Fan then on to Hay bluff and back to Blorenge for an 80km FAI triangle.

The 1st climb out was sweet after spotting a bird and I pushed forward to get the start in front of the hill. Returning to the hill more pilots where airborne and climbing in broken and windy thermals, there was a lot of drifting and tip collapses as the inversions had gotten stronger.

With Wez and Joe Dart we crossed the moonscape plateau that'ss behind Blorenge, Joe making the best of it when he caught a climb triggered from the lakes. Mercifully they waited for me to grovel up from quite low and we pressed on together with Dad not far behind and high.

We paused in a zero before Tal y Bont to let Dad join us… Not so easy to get to Pen y Fan as the hills could be quite greedy and we watched pilots launching from Tal y Bont and not getting away for a long time. The wind seemed to come from the South when we were high but down on the hills it was north or east depending on which ridge you were on, Dad sadly sunk out onto Tal y Bont and I thought he was doomed to soar it for the rest of the afternoon. I got to Pen y Fan first and accidentally sacrificed a glove aboverboard while trying to get a snap of the summit.

Extremely peeved at my freezing hand I opted to follow the arrow straight into the flats to go Hay Bluff. Feeling like the triangle was impossible with no clouds and plenty of east headwind. I was surprised to be joined by Dad in the flats as he had escaped from Tal y Bont by climbing out from the bottom landing there. A few minutes later Wez and Joe joined us getting the band back together.

As I was getting established in the flats I'd spied a wispy cloud that cycled every few minutes and when we got there some kind of convergence set up all the way to Talgarth and Hay Bluff. The triangle was back on!

But when we got to Hay Bluff we realised we had a decent South head-wind slowing us from going south… Worse than that… We worried that we wouldn't be able to soar Pandy to gain vital kms towards goal. Joe stayed high while me, Dad and Wez dove for Pandy ridge anyway.

The meteo wind was East today so I was sure it had to work, even if the East faces were all shady by now. Dad connected too low and slid off the ridge early and landed. Wez and I got our butts as close the ridge crest as possible and minced along. Joe stayed over the high ground was pretty high. But before long we were all back on the ridge nearing the take off.

The shade won over and I slid off the hill in katabatic and had to dive for a ploughing tractor in the middle of the valley. A few zeros later the climb pinged and we were close to the height required for goal but the wind was switching and it was clear we would need more lift if we were to make it.

Wez and I pushed on with Joe slightly lower. Unfortunately he couldn't connect with our climb as it pulled up the ladder on him and he had to land soon after. We eeked out a half up and as we got closer to goal we had a tail wind. The last glide over the town was buoyant but the massive power lines just before goal almost threatened to put one last twist on the tale… We hopped over them with around 100m to spare in the end. Capping a very eventful day.