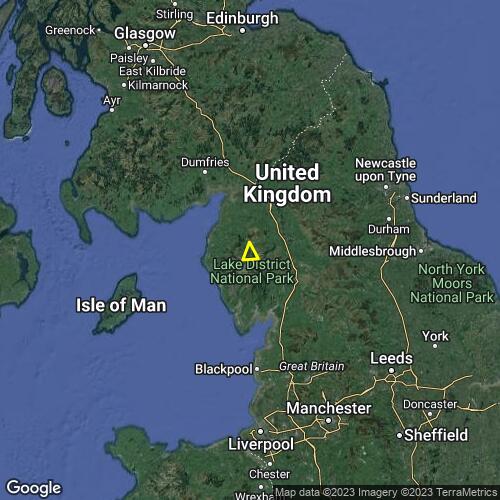 What a crazy week and a bit! First declare from Pendle to Penistone, 33km triangle from Parlick, XC over snow from Longridge and Magic Monday - Bradwell to Peterborough with several others for my PB of 135km. And then the league opens after all that!

I've always wanted to do a more adventurous triangle in the Lakes - looking through past flights, the UK mountain triangles have always impressed me greatly. Attempt one on Thursday from Red Screes ended in a bomb near Clough (but still an incredible flight going over the Helvellyn range), but Saturday looked good enough for another crack from Jenkin, a new site for me.

I planned the route as a mini version of the North South Cup triangle from Jenkin in 2019, and 37km would still be my biggest UK triangle. I didn't believe I could do it, especially after the failure on Thursday, but the only way to find out is to have a go.

Launched with Richard Meek into my strongest UK climb all the way up to 6,000ft, a great start. Richard scurried off and I started pushing forwards towards Cat Bells, but turned back deciding the sky was not convincing enough. I climbed out again next to Skiddaw and was greeted with a perfect line all the way to turnpoint 1 near Honister Slate Mine, so a good decision - I had learnt from my failure on Thursday! Seeing Wast Water from the air for the first time was very special for me - that's the first Lake in the district I went to, at the time I'd never believe I'd see it from 3,000ft higher than the tallest peaks.

Happily I met up with Richard again over Borrowdale - FLARM once again very useful for tracking pilots. I played the slow game here because it wasn't looking great towards Helvellyn where I needed to go next. The sea breeze was evident in the sky out to the West. When it started looking better, I headed West and left Richard, who was going on to greater things.

I met several gliders on the way to Helvellyn which was nice, and bagged the turnpoint. I started heading north, now below the summits for the first time, but the trusty Helvellyn range lifted me up again with a nice lee-sider.

I saw on Thirlmere that it appeared the South Sea Breeze had won the battle today, and hoped for convergence with the West Sea Breeze at Keswick to help me on the glide from Clough to Goal at Jenkin. And I'm pretty sure that's what happened, a super final glide got me to goal easily for my first declared FAI triangle, and ignoring the declare a 40km triangle.

A special day and simply a dream to see so much of the Lakes in one flight, and to see so many pilots having great flights on the way. Well done to all the pilots on the day, especially the top guys showing what's possible - Richard with his brilliant flight, John Westall tagging the three Peaks and the ever excellent Mike Cav completing a route I'd have never considered yet again!