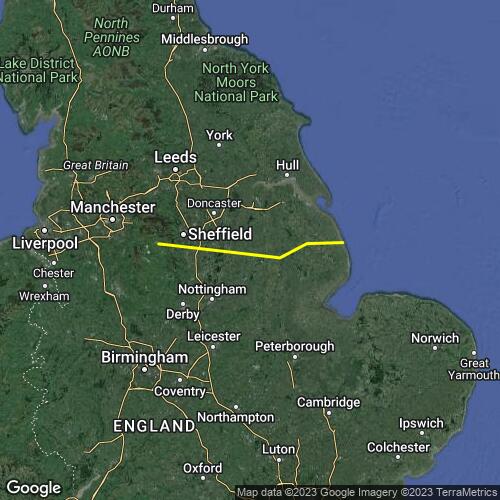 In the morning I was unsure of what we'd get with the likely overdevelopment. I therefore declared Lincoln rather than Skegness, and took off early at the hill as I usually like to do. It was pretty easy to get high and stay high, and our gaggle left the hill really early and got on the way. That initial climb was very wide and messy with seemingly everyone turning in different directions, so I was glad to get up and away without a mid air.

I was a little more conservative than some, which meant I ended up on my own from about 15km onwards. Not to worry, to be honest I quite like flying alone over the back some days. There were some massive clouds about with snow falling, but I was able to piece a nice line through without any trouble.

Lincoln came into view but I was low. Happily the rapeseed fields I was aiming for shot me up, and I had an easy glide into my goal cylinder. Nice to look at the cathedral, and to see two hang gliders too.

Now was decision time. It was really early and I'd got to my highest altitude at Lincoln, plus it was under a big cloud and snowing, so I didn't want to land there. Skegness was a no, because of excessive snow/rain. The more northerly line to the coast was blue with no cumulus, but had been for a while, so I went for that.

Clouds started to form but I got low after a really long glide from Lincoln. I worked everything I could getting a few climbs but not to base. One last low save to base secured the coast. It was fantastic to sit over the sea enjoying the moment, then it started snowing again!

Landed safely and great to get a third 100 and new pb. And at last I'm in the 100 club now the league is open!