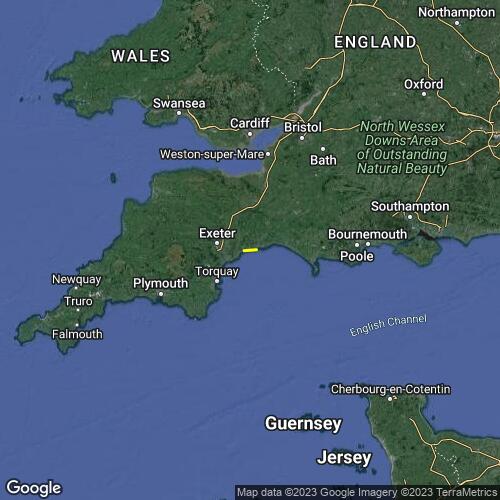 Deciding where to go was a tricky call. Our preference was to go inland but the forecasts suggested otherwise with Eype, Beer and perhaps Woolacombe being possibles. In the end we went to Beer on a forecast of SW until about 1400 then backing S until around 1600 when the convergence was expected to bring the northerly down to the south coast.

Launching at 1415 with a decent breeze, albeit still with some west progress was fairly slow initially. 9 or 10 of us were at Beer including Gerry McN with his virgin new Rook 3. He definitely won the prize for biggest smile when he landed!

Back to the plot! Wanting to get something in the League I had planned to cross Sidmouth but when I got there height was in short supply so I just went over to the church.

The wind was being a bit fickle and when I set off to go back east I did get a bit lower than I'd prefer. There was also a period of perhaps 10 minutes when the wind had some east so time to step on bar as I had by then got a bit of height.

I think I was the only one to make Sidmouth but that was more luck in taking off at what turned out to be the best time rather than any pilot skills. Not the easiest run I've done with a max climb of only 1.5m/s but all good and I landed just as the breeze eased followed by a very light rain shower.