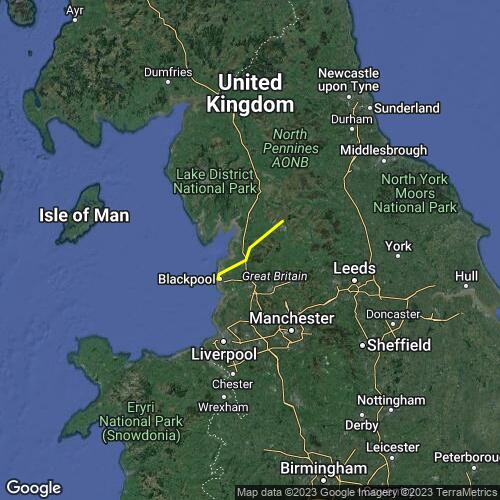 In't it Grand When Yer Daft!

Park Fell to Blackpool - April 2021 with Alex. A day when some things went wrong but that meant the day came so right in the end.

Err someone decided that we should go to Kettlewell on the Saturday morning. For my part in that decision, I'm sorry. It resulted in a two big walk up day which is good for the soul but not necessarily the morale. At the top of Kettlewell things were decidedly off to the north and a little bit too strong. A group of seven of us mulled it over with a pie and decided that we'd head for the better reports of conditions in the western Dales. Que, walk back down and pleasant drive over to Stainforth heading for Ribblehead, where we could walk up to Park Fell.

It's a reasonably brutal walk up but 30 minutes puts most of it behind you. It strung us out so Tam, Pete & Rosie, Charles, Harry, Alex and I arrived at TO strung out to find it blowing hard up the hill but not impossibly so. Alex and I unpacked the quickest, keen to make the most of an obviously XCable day from the late start.

A word about Park Fell. It's our own version of Parlick but points north. East and west faces are big but the north face probably bisects the wind a bit. Could be a good trigger though. Big, steep walk up to the top after the flat walk in from Ribblehead station. Seemed fine in a NE.

I'd hardly had time to settle into flying when we got the climb out. Alex made a second push forward and I saw the characteristic pause and hang back of his wing before it bit into the climb as he contacted proper lift. Then I was over there like a shot. Worth noting that this was well out in front of the soaring part of Park Fell. I don't know if this is the usual MO of thermals there but it worked well, taking us high over TO at 2.5 up.

We played in the whispies before deciding that the next obvious place to head was south down the Ingleborough ridge line. We were out of sequence though for the lift coming off the top. The cloud was dying as we descended down to the peak. This could be going wrong at any minute and so soon into the flight would have been plenty annoying. There were a couple of gliders around, I remember, one had been high and was now below ridge height which acted as a warning to me. This was still an inverted day so we were going to have to work at staying high.

Both of us centred on some weak buoyancy that was coming off the western limestone pavement, maybe Whitescar. A lee side dribble. I'm quite happy mincing around in this stuff but it's not Alex's cup of tea, which is not to say he's bad at it. Quite the opposite.

Edging us closer to the deep aggregate quarry and Ingleton, the mincing was actually doing us good. It's always important to keep high on descending ground and that's what our patience in this air was allowing. Just haring off looking for the next big climb would have put us in plenty of sinking air. That patience paid off as we were rewarded with a strong climb to base above Ingleton.

The flight section over the valley to Bentham was fast and mainly at base with some dark cloud forming. It's all very much easier when you're above the inversion. We had time to discuss some navigation. Over Bowland was obvious and the more we could stay inland, the better. Oddly enough though the clouds were stronger to our right i. E. The lower ground heading to the Lune valley and eventually the coast.

Things going well on the way to Bentham.

We'd make that decision when we actually got there though as we pushed into the rising ground of Bowland, confident we'd be booted back to base. It didn't quite happen that way leading to some head scratching as the ground came up to meet us. The situation was turning out to be the third in the series of going wrong. Isn't rising ground, into wind supposed to work better than this?

I found myself within a hundred metres or so of ground at Grit Fell. Fairly anonymous and also fairly lonely as a place to land out. Alex a little higher had some more options but I was on the last throw of the dice. There had to be something coming up the slope or my flight was over.

Desperate times call for hanging on tight. I call this survival mode and it's one of the joys of XC flying. Most definitely it doesn't always work out but when it does, you know that the concentration has paid off. All the attention to the feel of the wing, the scanning for wind sign and birds has got you out of the hole you were in.

Now back at base we had time for some thought on the next move. Going directly south would be cross winding into a blue hole. It looked okay by the time you'd get to Parlick but we had much better cloud nearby over Scorton lakes and the M6. Alex came over on the radio saying he was much more comfortable that we were near civilisation. My retort was; "You call Preston civilisation? " and I'm a Lancastrian by birth!

Nearing the M6 we pushed into the flats over fishing lakes with Morcombe Bay and the Fylde coast slowly becoming more distinct in the haze. Alex's instincts paid off in flying over to a bump still east of the M6. We were at inversion height again and it provided enough buoyancy to keep us at height. The wind drift was now entirely easterly which took care of us heading to the into the Fylde. One of the few expanses of truly flat land flying in the North.

The sky was hazy and blue and there didn't seem to be much chance of making our half joking goal of Blackpool Tower, but we pushed on into The Great Wide Open. And here's where our earlier difficulties and delays actually worked out. We'd timed it right in the end. An inverted day just needs time to develop.

Clouds formed as we minced on. Always tempting but never hoovering us back to base. Pete on the radio having a difficult time of it in the Trough of Bowland. We adjusted a little to make sure we were comfortably south of the Cockerham drop zone. Alex had spotted parachutes so we knew it was live, I'd managed to miss them.

Looking West, Fleetwood, Bispham and Blackpool are there somewhere.

South along the M6 to Garstang and an indication of the inversion we were cheating.

Crossing the River Wyre and we get a small climb and we know the goal is in the bag: -)

Fields and Bispham Golf Course mark our route in as safe bomb out fields.

And suddenly goal is in the bag.

Mad. You start on moorland, hang under string for 2 hours or so and end up here.

Cruising home, although there were rough climbs going out to sea that we had to negotiate.

When you get to Blackpool, you've earned your chips and ice cream…

Needless to say smiles all round as we got packed and laughed at the bizarreness of landing in the middle of the mayhem of Blackpool Front. Pete Darwood managed to sneak onto the north Fylde coast and Rosie was pretty near Kendal.

Huge thanks go to Tam who arrived in the car not much more than an hour after we landed, making the retrieve as pleasant as the flight.