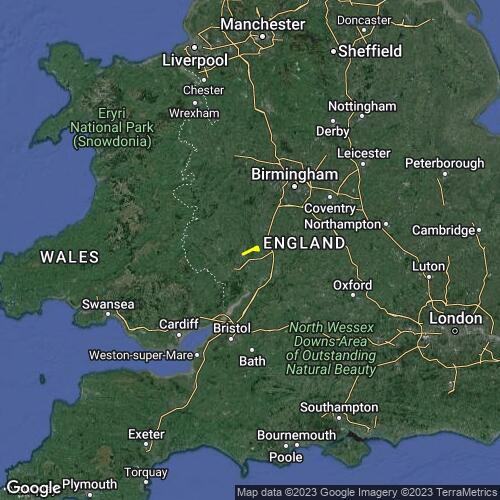 After abandoning my attempt to walk the Ridgeway home from Buckinghamshire (I did a bit about 50 of the 87 miles), I was determined to get some flying in, so set off to Malvern. Friday was pleasant, with climbs under the overcast to 2000 feet - although once it got sunny, I bombed out!

After a night at the lovely Fishponds campsite near Colwall, I returned to a sunny morning at Kettle Sings. It was a bit windy, so Peggy and I had a cup of tea in the car park before walking up to meet Lawrie Noctor, whose Zeolite GT she was planning to try.

The wind eased, and Lawrie launched and climbed. Peggy wasn't far behind, but it was harder than expected, and she did well to get in for a slope landing rather than going down. But a few more started staying up, and I launched as Peggy found a climb in front.

I found it rough at first, and was very conscious of the proximity of the ground. I couldn't keep up with Lawrie and Peggy, and the first climbs were both brief and windy. But eventually I found one out front that had little drift, and was able to fly well forward without losing too much height.

My objective for the day was to fly the 10k necessary to put this flight into the league (having landed at 8-point-something on Friday), and I turned back to the hill with about 8 done. Fortunately I found another excellent climb that took me back up to 4,000 feet over launchMy mind was made up: downwind! Sadly the clouds there were a bit mushier. I was low by the time I got to Ledbury, where an industrial estate was in shade. I landed a couple of km further on for a total of 19.5.

At this time of year you expect to find plenty of blackberries at the edge of your landing field. What I didn't expect was a couple of dozen freshish sardines just inside the gate. As I looked at them, a rat dashed past, as if to say: "Bugger off so I can get stuck in! "

I set off to walk to Ledbury station, but was picked up by a very nice old lady in a tiny camper, who had to reorganise all its contents to fit me in. On the drive she told me how she and her husband had used to travel around France in larger vans; now, on her own, she'd decided to be a merry widow and take to the road again.

Beside the station I bought tea and cake from a pottery workshop-cum-cafe, and at Colwall station I was kindly picked up by Alan Birtles. Back at the car park, there was more tea and ginger nuts with Peggy and co. A lovely September day.