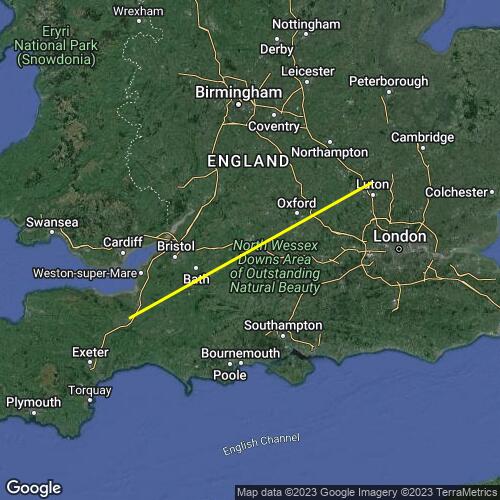 05.50am train to catch a lift with Kirsty on what looks like a not classic forecast. Thermal strength looks good but some doubt if we'll have clouds or not, and base is quite low. Hopefully it's not blown out on Sharpenhoe.

Arriving before 10am wind looks good, it's a bit damp on the ground but the streets are already set up with a low base just over 2000ft.

We decide to lobb off and if it's not good maybe top land and wait for the day to develop a bit. Takeoff and head for the bowl on the left and it's just lifting all over. We're both quickly near base and a bit shocked and not sure if we should go over the back at 10.15am! We play around in front of the 'hill' for a bit before climbing to base and heading over the back. Luckily the low base means the 3,500 airspace isn't much of an issue yet. Bouncing along with decent climbs till we escape the airspace, then we're wishing the base was higher.

We get what feels low (bear in mind base is around 3,000ft) but the south edge of the clouds works well almost every time. After getting partially separated Kirsty is a bit behind and lower. Heading to Uffington the streets become truncated and some cross wind is needed to stay up. Unfortunately Kirsty ends up landing.

Pushing on past Swindon the base rises finally and there's another juicy street but approaching the edge of Bath airspace there is a bit of a blue hole to go around, I opt to go around the south side to stay clear of the airspace.

Feeling I can avoid weaker climbs and push on was a mistake and it got me a little lower a couple of times. OK lesson learned. At the levels that drop down behind Ubley there's another blue hole. So I better get high in the last cloud before moving on. Only, there's no climb, oops.

Pushing on to a cloud over some small lakes doesn't work either. Get low the other side of the lakes and it's desperate. Windy and no consolidated climbs just bubbles. Trying hard to concentrate and stay alive. Drift, drift, it's gone, move on, drift again. Eventually the bubble gets stronger, don't search more just wait. Finally it pulls its stuff together and goes up nicely. Goal at Taunton is on again!

Should I fly on? It's only 4pm and some clouds still look good. But blue holes around and I'm tired of scratching low. Plus the wind is around 30kph and I rather just land by the station and get home at a reasonable time.