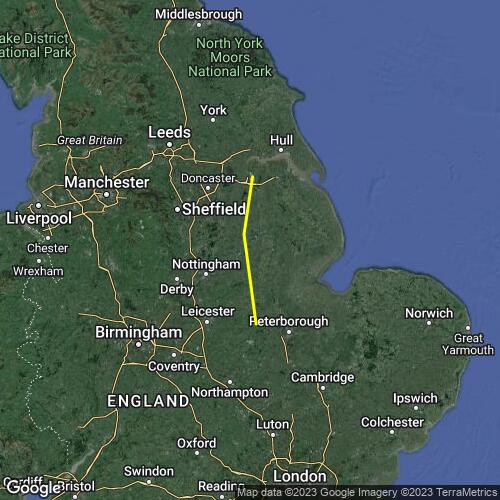 Rutland at its best. First tow was straight to the deck but a quick turnaround and with Tom Kane in a thermal we were away. Base was already at 5k over the field and then it was straight across the reservoir heading north. I'd set an ambitious goal in Yorks for 100 miles but with almost no wind at the start was regretting it. But the breeze picked up and so did the pace. I still struggle with cloud flying - they all seem fantastic up ahead but by the time I get to them more often than not there is disappointment. Some worked but after a while it meant having to slow down as I got low a few times and had to dribble back higher in 1 up - generally in the blue. Past Lincoln and with airspace less of a problem the sky began to turn and to the west it overdeveloped and went very dark. There was still an option to follow the rail line from Gainsborough towards Grimsby and trying to cross the Humber to Hull and possibly Hornsea - but goal was now out of the question and that seemed like a lot more retrieve for not many more kms. Then with a whiff of ozone the decision to land at Scunthorpe was made. Coming in I overflew it to bag a couple of extra clicks and made slow progress back towards the station, then went from headwind to tailwind as the direction flipped in a matter of minutes. I ended up landing om a cricket pitch heading north. Realizing there was a train imminently I check with a lone man in the nets. On hearing the train was in 8 minutes the gallant Mohammed packed up his kit, ran with me to the car park and delivered me to the platform with 2 minutes to spare. What a gent! I met up with Nick Clarke at Grantham - who'd had a winch PB to Bingham and in no time we were back at the field. The Humber crossing remains elusive but what a flight and what a day!