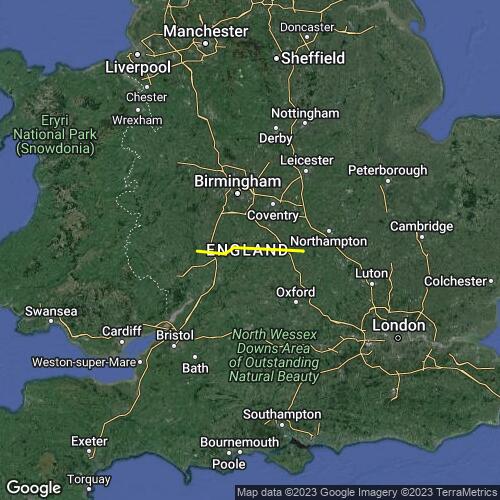 A large crowd gathered on the Malverns today, but nobody wanted to fly. Or rather, no one wanted to go first. So today it was my turn to be the sacrifice to the thermal gods. In keeping with tradition I glided to the bottom field, the hopes of everyone on the hill unable to conjure up a single bleep on the vario. And landed.

Having packed up reasonably quickly I then struggled to find the nearest road, then struggled to communicate my location to the taxi controller. Whilst talking to some locals about where I was exactly, and waiting for the controller to call me back, a taxi pulled up. He was just dropping someone off. Here! In front of me! 8 minutes later I was back at the top car park and walking up for another go.

Back on top about 13.45 and the last gaggle to get away were sky high over the back, 4 other gliders were in the air in front losing their battle with a weak climb and seemingly heading for the bottom field, leaving 4 of us left on the hill. Round 2! Paul J was away first and found a steady 1.5 to 2ms climb out front, which took 3 of us to base. Over the next 20k or so we swopped places sometimes high, sometimes cursing. We then split just before Evesham with Paul going SE and Gary H and I taking a more NE line over brown fields and toward cloud. Gary, being quite high, seemed to scream out in a boomer and was gone, whilst I carefully picked myself up from much lower down.

Once back at base I pushed on heading toward Banbury. In the distance I could see someone kicking treetops for ages before finally connecting with something worthwhile. It was Agi! We flew together around the north side of Banbury, only for me to push on too quickly and return to earth a few Ks on.

Our taxi driver cut us a deal which meant he could finish early and get back to his 3 kids, and we'd get back to the Malverns for the same price as station taxi and train fare - Result!