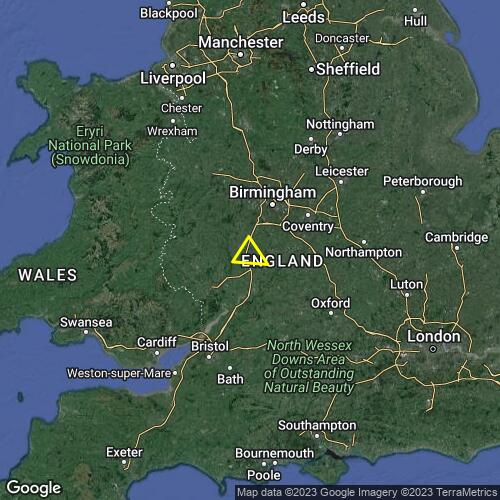 With light easterly winds forecast anyone and everyone rocked up to Worcester Beacon on "Big Thursday". With the light winds and a booming RASP forecast what could go wrong!

Given other commitments I couldn't get to the hill before about 1230, parking in the layby the spring to save messing around paying for the car park I sprinted up the hill (slowly) expecting to find an empty'ish hillside with everyone already up & away. But no, everyone, was still standing around waiting for "it" to happen. My FOMO (Fear Of Missing Out) concerns were unfounded.

Next came the big decision. I was keen for a trip to the seaside over the Welsh hills, but then with the light winds big triangles were a definite option. I always find it really satisfying landing back where I took off after a long flight. After a few chats and more pontificating, I opted for the triangle option.

A minute or two playing with my Oudie and I'd declared a 75km Triangle. Which was basically from Worcester Beacon, onto turnpoint one at some random roundabout in Droitwich, then my second turnpoint at a bridge over the river in Evesham and then finally back to take-off at the Beacon.

Of course, after timing my arrival to perfection I didn't have long to wait around in the hot sun before getting going. As always, on light wind days, timing one's take-off is crucial. Unfortunately, a couple of early birds mis-timed their take-off/thermal cycle ratio and bottom landed.

Soon though, someone took off and started going up reasonably well without gliding miles from the hill. Needless to say, that was enough of an enticement for the rest of us so I went for it as well. Very quickly, it became a busy sky and the climb-out with all of us looking for the best lift was a little chaotic. But it wasn't a drama and I think most people got high enough near the Beacon to warrant heading off towards Worcester as the first big target.

There was quite a few of us doing roughly the same task, certainly to Droitwich at any rate. After the initial climb we found an even better one just over Malvern itself which was a real boomer, with a constant 4+ m/s on my vario I buried the brake and enjoyed the ride to cloudbase at around 4500 ft.

Droitwich to Evesham was the hardest leg, at least I thought so. I'd been flying on my own since a little before Pershore so the benefits of gaggle flying were out. Just before Evesham I was down to 1700 ft and still about 2km from my turnpoint. Time for "Survival" mode, in other words, forget route progress and stay in the game and concentrate on finding a climb. What didn't help was that as I arrived at Evesham it coincided with the whole town sitting under a big cloud and being in the shade.

So, at 1700 ft I needed a climb and the water treatment works came to the rescue. Although it wasn't a really great climb, I was going up slowly and I finally got to 3500 ft before it seemed to peter out. I took a punt and headed off over the town to bag my turnpoint before turning for home. At my turnpoint I was back down to 1800 ft and wanting another climb. Hang-glider to the rescue, I spotted at hangie climbing just to the south of the town and headed off in their direction hoping something would come of it. As I came in way below them, I found the climb and although it wasn't strong, I was going up and stuck with it. After what seemed like an eternity, I was back to over 4000 ft and was able to relax again. With about 20km back to Worcester Beacon and finally some downwind flying I felt reasonably happy. Another climb saw me back to 5500 feet as I glided over the M5 and The Severn, even before that my Oudie had declared "Final Glide"! I never really trust that function, but with buoyant calm air and arms tucked in, I stuck with it and sure enough I arrived at The Beacon with plenty of room to spare at over 3000 ft.

As my car was down by the road on the west side of the Beacon I really want to top-land. But after some 5 hours in the air I was tired and with all the livestock back on the optimum spot for landing I opted for the easier bottom landing on the common. All I had to do was get down! After spending all day looking for climbs now I wanted some sinky air, but no, straight into another climb! After what seemed like another 5 hours I managed to get down! What a day, I was very happy with having completed my 75km declared triangle. Walking back to my car a bunch of drunken yobs at the Wyche Inn called me over as I nearly walked past them, AKA, Tony, Gavin and Steve. I enjoyed a pint and some chips before Tony kindly gave me a lift back to my car! A brilliant day!