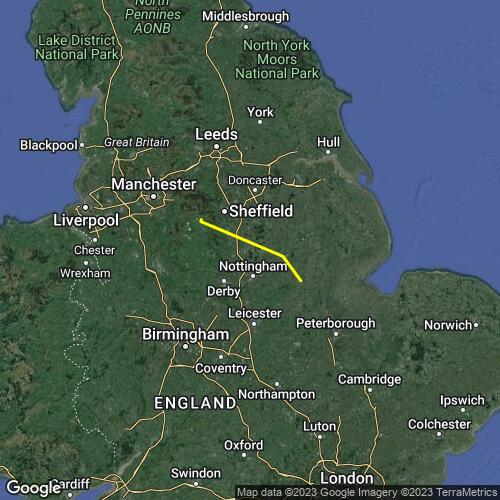 The RASP forecast improved at the very last minute in the morning and the mass of 'blue' air had pushed away and a dash north followed. A slightly late start was fine as it took a while to get going with the warm air; despite nice clouds downwind from 10:30 they didn't start to form over Bradwell til past midday. Climbing out was slow going and it took several 'steps' until there was lift up to 3500 and with a sailplane circling downwind it felt okay to leave the hill. Climbs were decent but for the whole flight I never had a real belter and I never got to base. Others did so obviously just me. There was a nice breeze which made for good speed, so it was frustrating to run out of luck at 4pm and get decked just short of Grantham. I think I must have been one of the earlier ones away as the whole flight I was alone. By the time I had packed up wings started passing overhead at good height - so others with more patience did better for the day. On asking directions to the station a charming couple - Josh and Tiff - offered me a lift. In fact I had a tour of their beautiful garden and a few gooseberries to top up the sugar levels - so a lovely addition to a grand day out.