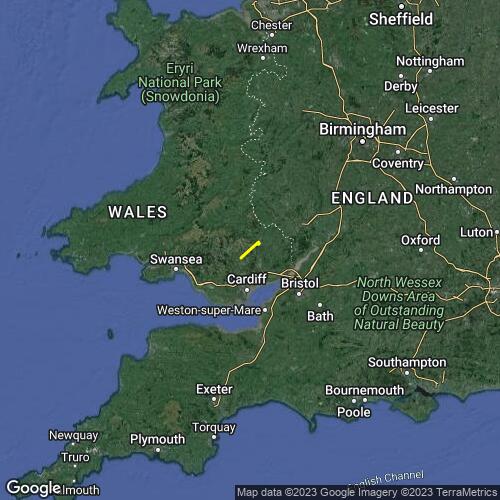 After six years in Pewsey, I felt it was time to nail my colours to the mast and fly in the BCC for Thames Valley - especially as I'm the club secretary. The day began with a dawn dash from Hundred House, as the round was sensibly switched at the last minute to the Blorenge. I managed to blag a lift up from Abergavenny from Mark Simpson in exchange for the loan of my mini vario, his XC Tracer being uncooperative.

At the Foxhunter carpark (no, not the Foxhunter pub - that confused a few pilots) I met my teammates, and we all got comprehensively briefed by Rob Meopham. We were told the day was likely to be best between 3 and 6 pm; nevertheless, Tosh and Barbs went early, and the first dozen to launch all stayed up comfortably. That lured a lot more of us off; 20 minutes later I was making my landing approach over Tosh's and Barbs's heads in Castle Meadow.

Craig Peters secured us a quick lift back up, just in time for the promised good hours. But it was slow progress - a couple of climbs fizzled out, and I'd just decided on another punt towards the town when a climb away from the hill took me above Craig and a couple of others, who started circling underneath me - the ideal place (for me, not for them)

The other two headed back to the hill, but Craig and I crawled in weak lift the length of the Blorenge. As I approached Blaenavon, Craig disappeared - was he above me? Below me? Vaporised by aliens? I later found that he'd headed back towards launch to have a nice wander about.

My second climb took me higher, to almost 4,500, but the time of paradise never happened. Clouds fizzled out as I approached them, a couple of small towns gave only scraps, and I landed above Brithdir in a harvested field. Getting down to the village was an odyssey; a style had an arrow on it marking a footpath, but on the other side was nothing but head-high bracken, which I had to slog through for twenty minutes down to the road. I've just been rereading George Macdonald Fraser's memoir of the war in the Burmese jungle. At least no one was shooting me.

I'd already messaged Simon Fouracre, who'd landed a couple of miles away, and I just had time for a cheese roll and a can of pop before his friend Jack kindly found room in his van for me. I was thoroughly exhausted by the time I put my van under the large oak tree in the big field at Park Farm.